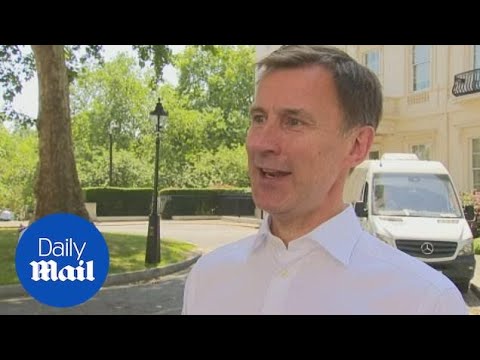 Jeremy Hunt believes Johnson will make ‘great Prime Minister’ Jeremy Hunt believes Johnson will make ‘great Prime Minister’Phillips and very disappointed for me and my team, but I’m also incredibly proud of the campaign that we run. I think we did ourselves proud and it was going to be uphill for us, because I was how many versus Romaine we have a prime minister guy to remain, and I think losses cuz. Everybody members felt that this was a moment when you just had to have someone who voted for brexit in the referendum, and that was in retrospect. That was a huddle we were never able to overcome is too much of an uphill struggle about time. I always knew that it was going to be a big mountain to climb and we sent the movement coming in our Direction during the course of the house. Things from young people from Pico outside to the Fairview got out of London and the South-East. The womb of the response that we were guessing, but we never knew what the Baseline was. What I want to do is to thank the one third of conservative members of the culture conservative MPS, who supported me incredibly lonely right V and we promise to give Boris the fight of his life. I think it’s good for the party in the country that we had contest with proper debates and I think that will stand for us in good stead as he takes out the most. Sunderland optimism. Infusiasm puts a smile on people’s face and he has a total unshakable confidence in our amazing country policy that we need and Taurus is gold, a confidence and I think you’ll do great job. The mood in the parliament could cause he now he’s overwhelmingly to unite behind new leader and to make a success of boris’s Premiership. I don’t think we’ll do that, because, whatever our differences on brexit the biggest risks, this country is Jeremy corbyn and that you know every single conservative MP, we can apply the brexit debate their own and they know that if we Heinz the new prime minister, then we Are going to have the keys of number 10 to someone who suddenly went to give a brexit will do an enormous amount of damage in many many other ways? Boris Johnson was declared the winner of the bruising battle against Jeremy Hunt in a dramatic ceremony at the Queen Elizabeth II centre in Westminster. Family members including father Stanley and sister Rachel were among those on hand to hear the news that he had secured per cent of the votes from activists. Mr Johnson – whose ambition as a boy was to be ‘World King’ – has already been plotting the first frantic phase of his premiership. Allies are determined to forge ahead with multi-billion pound promises to cut taxes – even if it means increasing government borrowing. However, Mr Johnson is also facing a potentially catastrophic Tory mutiny as MPs mobilise against his ‘do or die’ vow to secure Brexit by Halloween – even if it means crashing out without an agreement. Education minister Anne Milton quit this morning in advance of Mr Johnson’s expected coronation, saying she had ‘grave concerns’ and could not fall into line with his Brexit policy.