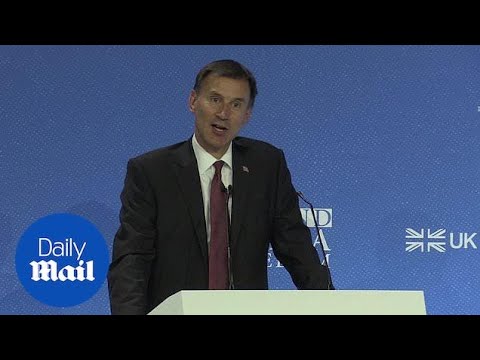 Jeremy Hunt on press freedom and Sir Kim Darroch’s resignation Jeremy Hunt on press freedom and Sir Kim Darroch’s resignationThe foreign Secretary of the United Kingdom, 99 journalists were killed last year. Another 348 locked up by governments to perpetrators of these crimes are ever held to account and journalists who suffered violent deaths into Heisman. Eight eight cases have been resolved, which is also important. The powerful people value their reputations, so the sunlight of transparency is the greatest deterrent to wrongdoing. Beside my profession, I don’t always enjoy reading what the media says about me. Indeed, a politician who stands out vagina. This might occasionally feel like a turkey voting for Christmas. I need to say may be my only chance: newspaper’s also make mistakes, journalists immune from The Temptations of hyperbole or excess, but for those of us who sometimes and of criticism, we should also reflect on the wisdom of Nelson Mandela when he said the media are a Mirror through which we see ourselves and others perceive us blemishes and National Security Florida’s Lakes, because a transaction need to get confidential correspondence. My ambassadors all around the world, but I defend to the hilt the right of the press to publish them if they received them, because that is what you have to do to Forest can speak for himself, he’s very capable of doing that. I will speak to myself. I think it is essential that pause a very experienced Diplomat. We defend them because we have the third largest in the United States and it is incredibly important close to the United Kingdom and for the defense of the values that the United Kingdom supports, like press freedom and so in the situation we have to find Diplomat. Who is just doing what he should have been doing, giving it Frank assessment, a personal assessment, Sophie political situation in the country that he was posted and that’s why I defended him and I think we will shoot on your second question. I wouldn’t use the language President Trump used and I will agree with it and I think we have to remember whatever the political posts that we face in countries where we are used to press freedom and it’s part of our daily lives and we’ve. We have to remember what we say can have an impact in other countries where they can take breastfeeding for granted, and that’s why this conference is so important because For the First Time flying the flag for tension between politicians and journalists we have to. We have that symbol of relationship. We each make the other one’s life difficult. What we end up with is not just free everstrong, the societies Amal Clooney (right) accused world leaders of failing to protect journalists and faulted their ‘a collective shrug’ over the slaying of Saudi writer Jamal Khashoggi. The lawyer, who is the British government’s envoy on media freedom, said journalists ‘are under attack like never before’, not just while covering wars but for exposing crime and corruption. The conference saw Mrs Clooney and Mr Hunt joined by Ghanaian investigative journalist Anas Aremeyawa Anas, (left) who wears a mask to protect his identity.