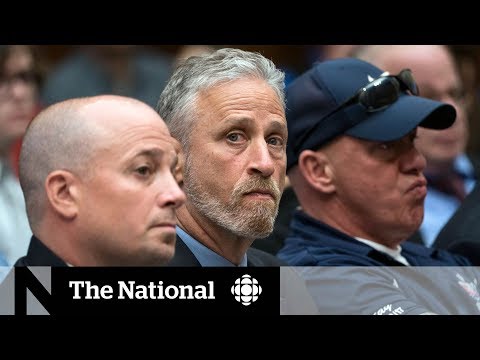 Jon Stewart scolds U.S. Congress over lack of support for 9/11 first responders Jon Stewart scolds U.S. Congress over lack of support for 9/11 first respondersYour indifference cost these men and women their most valuable commodity, direct and passionate, as he made a plea on behalf of 9-11 First Responders dying. They brought themselves down here to speak and no one shameful to embarrassment to the country, and it is a stain on this institute. Gruyere Stuart has fought for compensation for the police, firefighters and paramedics who were struck by a myriad of illnesses after digging through the rubble country. Back, it’s what gave a really Nation a solid foundation to stand back upon to remind us of why this country is great of why this country is worth fighting for, and you are pouring them the program to compensate anyone with health issues relating tonight. 11 expires next year and pay out recently cut back with 21,000 claims. Outstanding many could be left with nothing. Congress is considered bipartisan support that would continue to fund the program for 70 years. You’Ll never forget, while I’m here, to make sure that you don’t Stewart made it clear that he and thousands of others shouldn’t have to repeatedly appear before Congress to fight for what they’re owed did their jobs. Courage Grace 18 years later. Do yours! Jon Stewart spoke with such emotion such conviction. We wanted to show you more for the record. Breathing problem started almost immediately and they were told they weren’t sick. They were crazy and then the only got worse. Things became more apparent. Well, okay, you’re sick, but it’s not from the pile and then when the science became irrefutable. Okay, it’s the pile, I don’t know the money and I’m sorry if I sound angry and undiplomatic, but I’m angry and you should be too and they’re all Angry as well and they have every justification to that way. There is not a person here. There is not an empty chair on that stage that didn’t tweet out, never forget the heroes of 9/11. Never forget there. Bravery never forget what they did, what they gave to this country. Well, here they are Jon Stewart, the former Daily Show host, lashed out at U.S. lawmakers as he spoke up for first responders who were called to duty on 9/11 and still bear the scars.