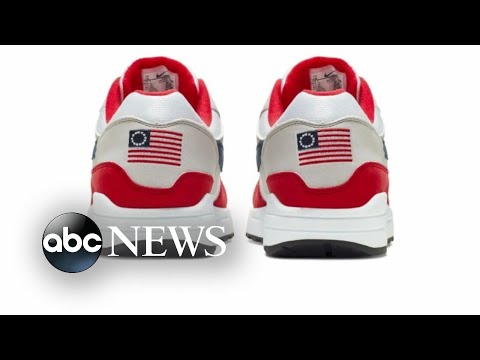 Kaepernick speaks out against Nike ad showing shoes with Betsy Ross flag Kaepernick speaks out against Nike ad showing shoes with Betsy Ross flagAnd guys were moved to some controversial news out of Nike. The company is yanking, a USA themed sneaker featuring a Betsy Ross flag after Colin Kaepernick told the company. It shouldn’t sell a shoe with a symbol that he and others find a fin percentage linked to racism. Now, Nike hat stores return the shoes and they’re not available on Nike, apps or websites. So to discuss this, I had to bring in Sirius XM Smite news very glad to see you there’s a controversial. One reason is because the suggestion is coming from Kaepernick, who is also a controversial figure and has been after kneeling at the national national anthem. And insofar of so tell me what you think about this lightning rod for Americans – and it comes very polarizing, provide Americans. But one thing you will have to agree that he’s not afraid to use his voice and he’s not afraid to stand up for something and he’s not afraid to call things out as he sees it. He saw this as has Betsy Ross flag. That’S been co-opted by white nationalist movement as a way to kind of show their disdain for this conclusion area that has become America in for the Flight 492 uses flag as what celebrate 4th of July in Independence Day, I find actually troubling, because why would you use A flag that is so controversial and not actually use the standard American flag that we have, and I think, we’re getting to a very slippery slope as we begin to Define patriotism as again Define what is patriotism as we can to find. What does patriotism even look like to use the 13th stars that represent the colonies that really represent a trouble time for US history that really involves slavery core? Why would you choose to use that to celebrate American Freedom? Why would you use that to signify this day? We’Re supposed to be all unified as one patriotism right of what it means to be an American when you that is so divisive for a lot of the individual. Bring me the Betsy Ross flag. Is the new Confederate flag right disguise with the Stars and Stripes in the colors, but kind of has the same contact in the same meeting that it has to go further? Actually is Stephen Curry, you know I saw the governor Ducey from Arizona talking to Siri. Today. Talk about, why wait for him to do his research, because every scholar has said that there is no evidence that she actually created Ross. You should do it a different man or a different way, but then to go further. That too, as well the u.s. code, the US flag code, says that we should not sell any type of flag for merchandising. So I’m always curious about how we really find him. What is acceptable? I want to hear something because there’s been a number of companies who been in hot water because of tone-deaf ads or Steve’s so controversial product. You know this is a situation where someone actually came forward and try to stop it. So what would have happened? Kaepernick said nothing, there was no one in the pr advertising meeting. That said, don’t do this and they actually put the shoe out and it was selling Erica want this shooter game hit Market on the shelves for Nike, and what do they do at that moment? Do they pull off the shelf inside is actually advocating. We talk about diversity, inclusion when you talk about happiness, either table when you talk about having different voices representation that matter in order to prevent this from happening. There should have been someone in that room and that marketing room and that product design room that says: why did you choose this flag that is so controversial? Why don’t we just do the traditional American flag? Are we being viewed as too liberal? Are we being good as to Progressive? Do we need to lean anymore, the conservative side of it right, instead of just being American and American flag? My show tomorrow about the role of corporate social responsibility. They have to be mindful of their role and how they really do Advocate discourse and conversation with in America. Abc News YouTube channel on the right over here to subscribe to our Channel and don’t forget to download the ABC News at 4. Breaking news alerts, thanks for watching The brand pulled the Betsy Ross flag sneakers after Kaepernick voiced concerns over using the controversial design.