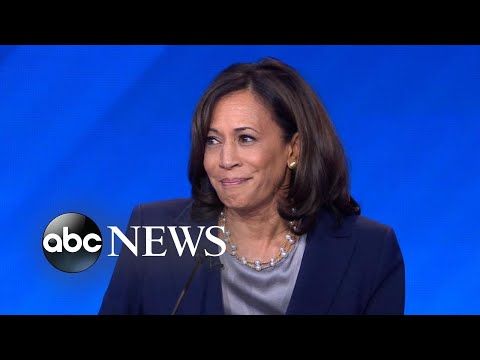 Kamala Harris compares Donald Trump to ‘little man’ in ‘Wizard of Oz’ Kamala Harris compares Donald Trump to ‘little man’ in ‘Wizard of Oz’Senator Harris, how was your trade policy differ from President Obama’s criticism of that more than I just looking at where we are now, which is that we’ve got a guy in the White House who has been erratic on trade policy. Bucks trade policy by tweet frankly born on his fragile ego. It has resulted in farmers in Iowa, with soybeans riding in Benz looking at bankruptcy. When we look at this issue, Sandra Harris Administration always going to be about saying, we need to export American Products, not American jobs, and to do that, we have to have a meaningful trade policy. I am not a protectionist Democrat. We need to sell our stuff, and that means we need to sell it to people over is that means we need trade policies that allow that to happen. You asked earlier about China, it’s a complicated relationship. We have to hold China accountable, they steal our products, including our intellectual property, they dub substandard product into economy. They need to be held accountable. We also need to partner with China on climate and the crisis at that percent. We need to partner with China on the issue of North Korea. I am on and I think the only person on the state, the Senate intelligence committee, Senate Homeland Security committee. We need a partner on the issue of North Korea, but the bottom line is is Donald Trump in office on trade policy. You know he reminds me of that that guy in The Wizard of Oz, you know when you pull back the curtain, poke Sanders. George Stephanopoulos here, thanks for checking on ABC News, YouTube channel if you’d like to get more video, show, highlights and watch live event coverage click on the right over here to subscribe to our Channel and don’t forget to download the ABC News app for breaking news. Thanks for watching Sen. Harris answered a question on trade policy. READ MORE: https://abcn.ws/2kekEk3