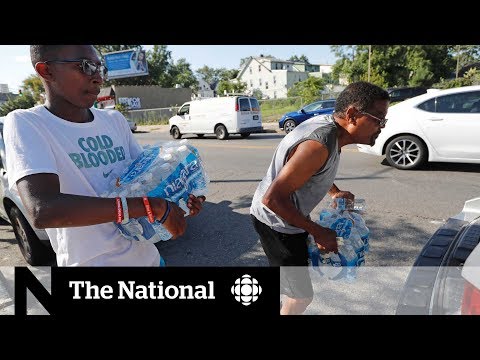 Lead contamination in New Jersey drives residents to stock up on bottled water Lead contamination in New Jersey drives residents to stock up on bottled waterThe cases of water Pile in the lineup grows in for every bottle that goes out. The anger and frustration in Newark builds for many residents. It’S been months since I trusted the city’s water supply. It makes me feel angry that it’s a situation that wasn’t control before it got this bad, from brushing teeth to cleaning produce to cooking. Almost everything is done with bottled water. Another country’s gave a filters last October, but the fear is there not working. Last week, Environmental Protection Agency said summer ineffective, so the EPA ordered the city to handle bottled water tainted water problem in low-income, mainly African-American neighborhoods has drawn comparisons to the crisis in Flint Michigan officials here say the difference between Newark and Flint is that the water coming Out of newark’s reservoirs, it’s safe accommodation occurs when it passes through lead service line connecting some homes to the city Supply filters. More testing is needed to see if they’re working, and so we are acting in, to use an overused phrase, an abundance of caution and took to make sure that we’re getting out of head of this last year, saying for months, officials deny there was a problem failed To quickly inform the public anytime EPA is saying you use that hand your citizenry bottled water, where, in a Health crisis it’s bigger than Flint or Newark, seems like maybe after plants. A lot of people hit the snooze button and weren’t paying attention to this Drinking Water Crisis that we have really across the country. Newark is the alarm ringing again resident say they want the city to expand the number of homes eligible for free bottled water. Water is a human right, fixed it from the federal government getting from plastic.. The top may end up being more than the short-term fix. Stephen desouza CBC News. Another American city is facing a water crisis and like Flint, Mich., it’s because of dangerous levels of lead in tap water. This time it’s Newark, N.J., in a situation that experts say should serve as a wake-up call for the rest of the U.S.