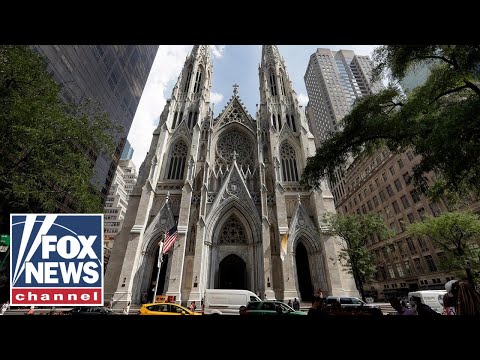 Man arrested for trying to bring gas cans into St. Patrick’s Cathedral Man arrested for trying to bring gas cans into St. Patrick’s CathedralAt approximately 7:55 p.m. tonight and individual pulled up in a minivan on 5th Avenue left the car there for sometime walk around area, but it’s 1755 hours or rather 7:55 p.m. individual return to that. Minivan takes out to two gallon cans of gasoline containing two bottles of lighter fluid, the type of which you would use to light a charcoal, grill or barbecue to Extended lighters of butane lighters that controlled by a trigger and after the same Cathedral as he enters the Cathedral he’s confronted by a cathedral security officer who asked him where he’s going and for him to meet, can’t proceed into the Cathedral of carrying these things. That points in gasoline apparently is Spilled Out onto the floor. As he’s turned around the same Patrick’s employee notifies to CRC critical response command for the counterterrorism bureau, police officer, Stryker team, who are outside that the individual went South on 5th Avenue and onto 50th Street. They catch up to the individual who’s carrying the gas cans and begin to question hit. His answers be consistent and evasive, although he remained conversation with them and Cooperative is basic story was that he was cutting through the cathedral to get to Madison Avenue that his car had run out of gas. We took a look at the vehicle. It was not out of gas, and at that point he was taken into custody and brought to the Midtown North Station House. There was some very good work done here to buy the Saint Patrick’s Cathedral security officer, who encountered this man immediately inside, as well as the to CRC police officers, who tracked him down, engaged him conversation question Tim located the vehicle and took him into custody questions. It’S too early to say that it’s hard to say exactly what his intentions were, but I totality of circumstances of an individual walking into an iconic location like st. Patrick’s Cathedral carrying over four gallons of gasoline. Two bottles of lighter fluid and lighters is something we would have great concern over. His story is consistent is not consistent, so he is in conversation with detectives right now. I think of you add to that. The events in the Econo close fashion Nova the fire Notre Dame this week and and all the publicity around that this is a location where we always have heightened security. That is normal we’ve added to that in recent days. I think this is an indicator of something that the that would be very suspicious, not the in his initials since we’re talking to him now, but I wouldn’t be able to characterize his statements beyond what he told us in the incident encounter. She is known to police and we are looking into his obviously talking to a couple of other agencies. This investigation involves the detective Bureau and involves the intelligence Bureau, the counterterrorism bureau and the FBI’s joint terrorism task force out of an abundance of caution, because we don’t know exactly what his mindset was, what his motive was, but we do know that carrying two cans of Gasoline and the equipment to light that through a public area and a place like Saint Patrick’s Cathedral, is something that presents a danger to the public and that’s why he’s in custody people inside the church at the time he entered the church was open and them again He was creating a hazard, I’m not going to characterize his statements and that level of detail and we’re still talking to it – we’re talkin to the district attorney’s office. At the same time, we’re talking to him at the point that we charge him Primus. Pacific crime will release his identity all right. Thank you very much. NYPD’s Deputy Commissioner of Intelligence & Counterterrorism John Miller will brief media in regard to the incident at St. Patrick’s Cathedral.