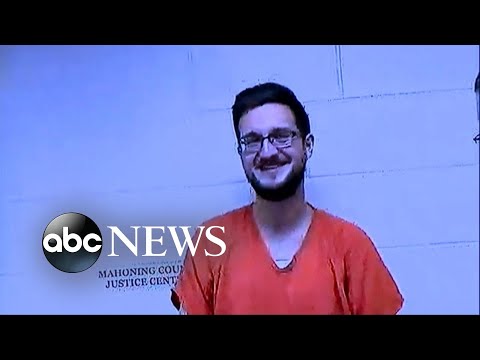 Man suspected in Jewish center shooting threat pleads ‘not guilty’ Man suspected in Jewish center shooting threat pleads ‘not guilty’Troubling news investigators across this country are looking at it 3 separate mass shooting threats in three states; authorities arresting suspects in Connecticut Florida and Ohio police, say a self-proclaimed white nationalist, showing himself Jewish Community Center in Youngstown, and one of the suspects posting he’d like to kill A hundred people and tonight the FBI warning about the rise of domestic Terror threats after El Paso in Dayton, and here’s Alex Perez the Ohio man who shootout this Jewish Community Center in Youngstown smiling as he pleaded not guilty in court. Today. James Riordan’s, home Friday, saying they found an arsenal of semi-automatic weapons and bulletproof armor ortisei posted this disturbing video on his Instagram firing. A semi-automatic weapon is Sirens blaring with a caption Reading Police identified, the Youngstown Jewish family community shooter as local white nationalist. I kicked off an intense investigation of very rapidly evolving investigation because of the way the world is in investigators. I want a Homeland for white people just one in a string of arrest following the massacres in El Paso in Dayton that police eight have forwarded possible tragedies. This dramatic police body camera capturing the moment Florida officials arrested Tristin wicks in Daytona Beach after he allegedly texted his girlfriend his intentions to shoot as many people as he could writing. A good 100 kills would be nice and in Connecticut, Brandon wagschal, allegedly seen in this Instagram photo wearing body armor and a helmet police discovering a Facebook post that they say showed his interest in committing a mass shooting police said he purchased Parts online to build his Own rifle police, recovering firearms and ammunition from his home all this as demonstrators in all 50 states weekend, calling for tougher gun laws and Universal background checks from President Trump in the days after the mass shootings saying this background check, laws may already be tough enough. Just remember: we already have a lot of background. Thank you. Live in Chicago Dallas, after El Paso and and federal authorities have been warning of potential copycats nights that Ohio man we know was in court. A self-proclaimed white nationalist in the judge Now setting Bond bail. He must be held on house arrest, a banned from social media and banned from any Jewish house of worship David Alex Perez. Thank you. Thanks for checking up ABC News, YouTube channel, you like to get more video show, highlights and watch live event coverage click on the right over here to subscribe to our Channel and don’t forget to download the ABC News app for breaking news alerts. Thanks for watching James Reardon’s arrest was one of several made after the massacres in El Paso and Dayton; demonstrators across the U.S. have marched for tougher gun laws.