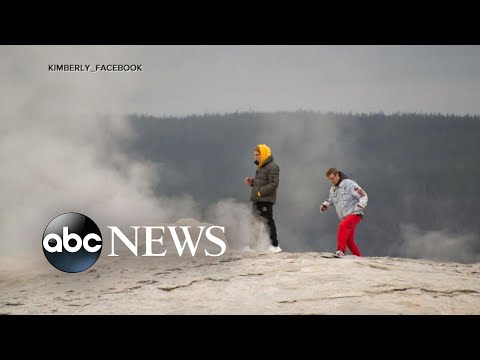 Men stick heads in Old Faithful geyser Men stick heads in Old Faithful geyserBack now, with a warning when you visit some of America’s National Treasures, don’t get too close to man, learn that not only the dangerous it can get you in trouble with police Marcy. The pictures with this Wednesday at all. They really do Eva and they’re being used in the case against these guys, the woman who snapped them posted them to a group of dedicated to highlighting people who break the rules of the park. Writing that everyone who was in disbelief of what she called the complete stupidity of the men’s actions, photos capturing these men, walking onto Old, Faithful, moving closer and closer to the steaming guys are being over. It apparently taking pictures my family and I just couldn’t believe what was happening. They just didn’t care and we couldn’t believe that they were. They thought that that was okay, Kimberly on Facebook and giving them to Yellowstone Park Ranger. The men, whose name haven’t been released now facing criminal charges sighting for going off the parks boardwalks, which is illegal and dangerous, with a geyser erupting about once an hour with boiling water averaging 200 degrees. The rules are posted everywhere there in multiple different languages, all around the board of the guys are. There are rules, and it is very dangerous that the ground is unstable in very fragile. This man, ignoring those Park Rangers sticking his head inside the Geiser, disorderly conduct and added to a growing list of people taking dangerous risks at the national park. This summer, this nine year old girl thrown into the air left with minor injuries after getting too close to a bison. While with a group Old Faithful and last year, a group photographing muselk fighting when one suddenly charges forward knocking a man to the ground by getting too close to the parks, thermal areas, the guys Comfort Inn those photos at Old, Faithful will now have to face a Judge in federal court down coverage click on the right over here to subscribe to our Channel and don’t forget to download the ABC News at 4. Breaking news alerts thanks for watching The men were cited and will have to appear in court after getting too close to the famous landmark.