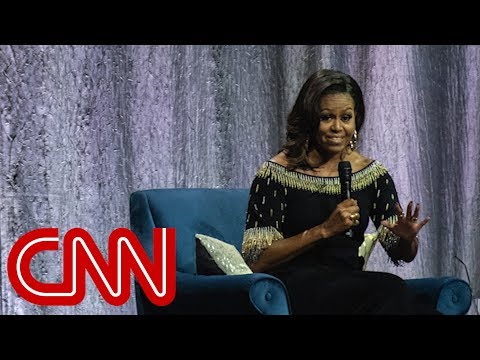 Michelle Obama compares Trump to a ‘divorced dad’ Michelle Obama compares Trump to a ‘divorced dad’The former first lady and best-selling author, Michelle Obama, is taking a swipe at President Trump and also divorced dads, listen to what she said to Stephen Colbert at an event in London about the current state of America, as she sees it. A broken family teenager you know, is tough weekends with divorced. It feels like it’s fun, but then you get sick. That’S what America is going through a divorce right now practice before you understand where she’s going with this divorce dad’s for someone like Michelle Obama, is remarkably unwoke to use the term that the kids used. There are lots of divorced at sure I would venture to say most divorced dads who don’t have their kids on the weekend, but have their kids as a major co-parent. A lot of analogies are labels or metaphor. Someone can use to describe the Donald Trump presidency. Its effect on America, a lot of really effective ways to do that. I think you know attacking doors. Dance in a way is probably not the way to go. 50 % of marriages end in divorce and many of those parents equally co-parent when they have kids and it’s not the olden days, really where Dad’s or get the kid on the weekend and give him she says, he’ll give the kid candy and that feels fun for A while, I said anymore, and I think it shows a rare moment of being out of touch with the rest of of America in terms of culture and society and those things Michelle Obama usually typically has her finger pretty well on the poles. So that was a sort of a strange thing and it’s really caused a ripple today with divorced, dads and, and she hasn’t said anything about I’m being wrong about saying it, but I certainly think you’re right. It’S not very am very kindly of her and is standing. Is incredibly open about so much in her personal life with the former presidents absent, so I just I just I just found it easy and interesting rather, and you know you also think about the fact that she has done like probably hundreds of these at this point And she’s sitting with the comedian – and maybe she says, okay, but I said that if somebody who is not Michelle Obama said this, what would happen if people be talkin about all over the place? I mean this is the start of her European tour she’s in London. These are sellout crowds. This is the Memoir. The people say is going to be the best selling one of all time, I’m millions of dollars and folk advance. I mean everyone is someone else and done this. I think it would have been a really a much larger Gap in terms of comparing Donald Trump divorce. She has said that Donald Trump has she made her angry her body Buzz with fiery when he did the Access Hollywood tape, I’m she was so upset that he shall never forgive him as what she said about pushing a birther movement, family and dangerous early. She has viable and very sort of articulate ways of expressing her, I’m just like, perhaps of of trump, but this was one that truly felt. Oddly, disconnected, I think, that’s probably the last time we’re going to here, permit this analogy, but her anger at the President Trump, given the fact that she was worried about the safety of her children is understandable. During an event on her book tour in London, former first lady Michelle Obama compared the state of politics in America under President Trump to living with a “divorced dad.” #CNN #News