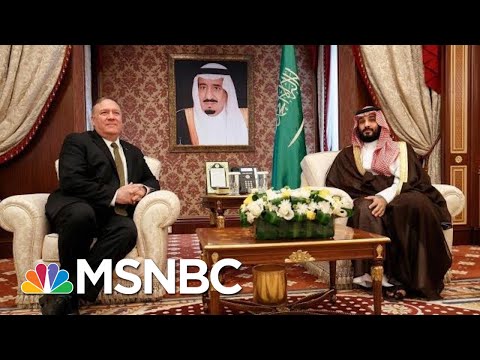 Mike Pompeo Visits Saudi Arabia As U.S. And Iran Trade Threats | Hallie Jackson | MSNBC Mike Pompeo Visits Saudi Arabia As U.S. And Iran Trade Threats | Hallie Jackson | MSNBCA lot of development expected today over the weekend to is Secretary of State Mike Pompeo, is in the region working to build an alliance against Tara cuz. The alliance is already there. I think he’s trying to put everybody on the same page, and there was a lot of discussion about putting together a joint Proposal with Israel, the UAE, Saudi Arabia and the United States. In order to improve security here in the Persian Gulf and in The Straits of Hormuz in particular, so if you look at where these officials are going, John Bolton Mike Pompeo, both they are going to meet with other on hocks and trying to make sure that they Are singing from the same song sheet when they go to the G20 in Japan at the end of the week? So it is, it is not. A coalition seems to be looking for a diplomatic solution. It seems like a team that is gathering together to come up with a unified strategy and what’s the response been from Iran so far, so is very nervous about more sanctions coming be. The government is talking tough and there was more tough talk from the Navy Chief who said that the Iranians are prepared and capable of knocking down another darken surveillance, drone and the enemy, but they are in a very difficult position. Their economy is tanking; they do need a way out of this, but they we need a way out of this. That doesn’t seem, like total, capitulation, total humiliation, because that has been in folding extremist. So there is a concern where I am across this this region. That too many sanctions on Iran could not just crippled the economy but actually kill the economy and Trigger not only about response from Iran potentially conflict as well. Msnbc with our newsletters head over to msnbc.com newsletters to sign up Secretary of State Mike Pompeo met with Saudi Crown Prince Mohammed bin Salman to discuss “heightened tensions” in the Middle East region. NBC News’ Richard Engel reports.
» Subscribe to MSNBC: http://on.msnbc.com/SubscribeTomsnbc