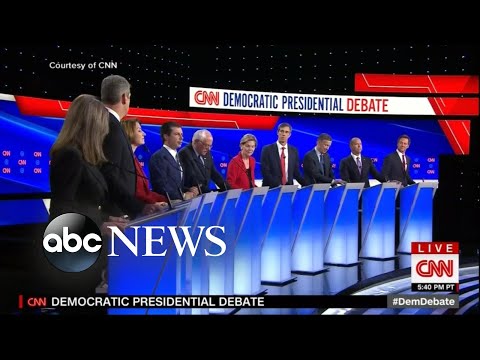 Moderates take on progressives at Democratic debate Moderates take on progressives at Democratic debateShow down last night at the democratic debate in Detroit on night, one they were clashing over Healthcare and how to beat Donald Trump in Detroit with all the details good morning, Cecilia well, this debate last night expose a real rest within the Democratic party. Is things lesser-known candidates took on the two leading liberals, Elizabeth Warren and Bernie Sanders forcing them to play defense against accusations of their Progressive policies? Bad for the party don’t be good for Donald Trump overnight of fight for the future of the democratic party. We need to have a campaign of energy and excitement and vision. Let’S get real tonight, we debate, But ultimately we have to beat Donald Trump. The moderate candidates taking on progressives Bernie Sanders and Elizabeth Warren warning that their policies are too extreme and could deliver President Trump. A second term the election to Donald Trump. I think we got to focus on where Donald Trump is failing Center. The top issue for voters – Healthcare, former congressman John Delaney, a Centrist, challenging Sanders and Warren on their calls for medicare-for-all, with bad policies boaters and get Trump re-elected about how to best provide that help. Him mayor, Pete, buttigieg, saying it’s time to stop worrying what Republicans say if we embraced a far-left agenda, they’re going to say we’re a bunch of crazy socialist. If we embrace they’re going to do they’re going to say we’re a bunch of crazy social Sanders, trying to lean into his record and fight off a Ohio, Congressman, Tim Ryan hearing aids and one thing they all agree on it, they need a nominee who can beat Trump, as a president tries to fire up his base with Ray author Marianne Williamson, with an impassioned plea, if you think any of this walking us is going to deal with this dark psychic Force very dark days and buttigieg with a warning across the aisle. You were watching this at all and you are a republican member of Congress. Consider the fact that, when the sunsets on your career, the thing you will be remembered for is weather in this moment. This President, You Found the courage to stand up to him or you continue to put party over country over and over again. This is the Google map of the most searched candidates before the debate. As you can see, it’s quite a mixed, but during the debate you see all of that yellow that is Marianne Williamson, a result of all of her unconventional responses. Cecilia, all of these candidates, they’re going to need in order to qualify for the next debate and they’re really trying to stay in the race are surprisingly wondering that did not come up. Last night, you didn’t Joe Biden he’s a strong showing here tonight. He has a lot on the line after his lackluster performance. At the first events, Joe Biden will be center stage tonight next to Harris who successfully Pokemon. In the last debate and Cory, Booker Biden save a lot of attack on everything from healthcare for race, Cecilia it over here to subscribe to our Channel and don’t forget to download the ABC News app for breaking news alerts. Thanks for watching Moderate candidates like John Hickenlooper and John Delaney claimed the policies of progressives like Bernie Sanders and Elizabeth Warren could deliver President Trump a second term.