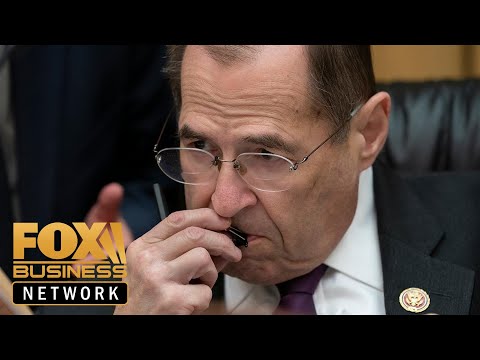 Nadler schedules Trump impeachment probe vote Nadler schedules Trump impeachment probe voteTime we’ve got a lot to talk about tonight. Let’S start with the beginnings of, I guess I question an open question for the chair of the Judiciary Committee of whether or not to proceed with impeachment your thoughts. Why was it the announcement and I didn’t see any good faith basis for impeachment? This is an impeachment inquiry and in search of something to impeach President Trump over. It’S an abuse of power by the house. Democrats follow on the abusive power of their Allied politicians in the Obama Administration, a deep Staters who been harassing President Trump and it’s the next phase of the Ku and there’s a one-way to maybe cut this short Senator Mitch. Mcconnell, the majority leader, their house or the Senate, Republicans say you know what they’ll be no impeachment trial here, we’re not going to take it. We’Re not we’re not obligated to take up a guard or garbage in impeachment effort of pure harassment. President Trump for not going to waste, set a time here, the set a time here and we’re going to shut it down, so they’ll be no impeachment trial. At least we’ll have one body of Congress saying no to this abuse of President Trump. It sounds. It sounds workable. Let’S turn to Judicial Watch and New State Department documents that you have a showing of Hillary Clinton supporters effort to actually is the classified information into the hands of various Senators. What in the world is this evidence that the Obama Administration was orchestrating a a wide-open assault on the the soon-to-be president of the United States? It was a desperate, last-minute effort by Obama, pointing use, as you point out, many of whom were Clinton donors to push out to Friendly’s in the Senate. Anti trumper’s, both Democrat and roll supposed information classified on Russia and the deadline was the president’s inauguration. So if it were in the ordinary course why the rush to put it out, they knew they’re up to no good in Frack the documents, oh, that they were getting frustrated of, had having to follow the rules about the declassification or the or the approval of sending Classified information to the legislative branch and it looks like they were bypassing the rules to do so so find the justice department and I’m doing a criminal investigation. There’S one thing they need to do, which is to move over to the state department and just as they may be, looking at the justice department and FBI in terms of the Ku gate targeting a President Trump, because the just the latest in a series of disclosures Out of the Obama State Department showing that Fusion GPS, that whole gang was using the state department, the laundry the information to Target President Trump as well, and then again with Democrats in the house and the Senate. You know what, if there’s an impeachment against President Trump. I look forward to President Trump’s Warriors may be bringing in house Democrats and house senators and Senate Democrats who were colluding with this gang to try take him out even before he was elected president. It is not rageous. It becomes more outrageous with every document email text that we see if I’m still a group of the IG blue. Despite that, you know we had to sue to get the information.. Why are we still waiting to take action? The IG can’t be the end-all and be-all. Here we need the justice department to speed up their pursuit of Justice. I couldn’t agree with you more time, let’s turned very quickly to speaking of Justice bipartisan Justice, something to me. I can’t recall a time when all 50 State Attorneys General antitrust Target, but here we are Google there and their crosshairs while I’m suspicious, when both Republicans and Democrats agree and usually go after one company, I would focus if I were them. I would focus on Google impact on our elections, their suppression of conservatives, their violation of the law that protects them for being sued. They pretend to be a neutral party, a bulletin board more last, but at information shows that they suppress conservative their thumbs on the scale. And I don’t know if that’s an antitrust issue of what that needs to be the focus, as opposed to politicians figuring out what their market share in advertising dollars needs to be reminded everyone, the psychological effects of search engines and a pro Clinton Democrat excuse me sufficient To have shifted between 2.6 and 10.4 Vaught eye in the 2016 presidential election stunning stuff time is always great to see you thanks for being with us tonight. You welcome. Oh thank you. Thank you. Judicial Watch president Tom Fitton talks about the beginnings of impeachment discussions.