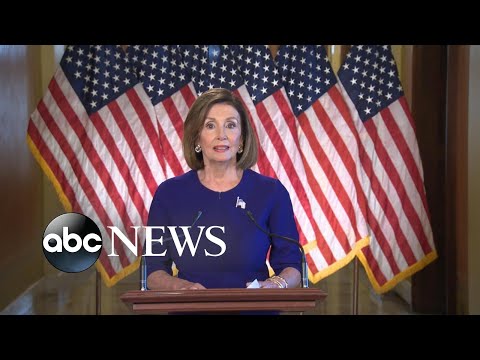 Nancy Pelosi says House will go forward with Trump impeachment inquiry Nancy Pelosi says House will go forward with Trump impeachment inquiryThe very rare and historic moving Washington late today house Speaker Nancy Pelosi after months of urging caution telling fellow Democrats to follow the facts. She was before the cameras a short time ago. Saying President Trump is quote seriously violated the Constitution. Speaker Pelosi saying no one is above the law announcing it. Official impeachment inquiry will now move forward. It comes after the president acknowledged he brought up Joe Biden, not a phone call with Ukraine’s new president, and just today talking about why hundreds of millions of dollars US military aid to Ukraine was being held back so tonight hear what comes next. What has speaker Pelosi Now set into motion after declaring the president must be held accountable and the saving the president calling this a Witch Hunt, what he says he will now release ABC Mary, Bruce Lee Tesoro from the hill tonight she’s resisted for months, but tonight, speaker Nancy Pelosi finally made her move. The times has found us today, I’m announcing the House of Representatives moving forward with an official Richmond inquiry. It comes just days after the president acknowledged. He had asked the president of Ukraine to investigate his political rival, Joe Biden and his son Hunter today. The president admitted the days before the conversation. He ordered his chief of staff to halt four hundred million dollars in foreign aid to Ukraine, but he insists holding that money was not an attempt to pressure the Ukrainian president 24 hours ago. He said he withheld the money because he wanted to get Ukraine to address. Corruption is corrupt, but today he said he withheld those hundreds of Millions for a different reason put up funny. I think it’s unfair that we put up the money. Then people called me. They said all Let It Go and I let it go, but we paid the money the money was spent. There is no evidence, Joe Biden or his son acted improperly with regard to Ukraine. Today the candidate fired a President Trump how to get away with shredding. The United States Constitution that will last forever are you concerned. Capitol Hill was a flurry of activity in the past 24 hours. A wave of Democrats declaring now is the time to impeach and in front of Nancy Pelosi, was asked if the president had committed impeachable offenses and gave a hint of what she was about to do. And if that is the case at the president of the United States, would ask a foreign government to assist him in a little way of that would be wrong. Would it be agreeable to the actions of the Trump presidency, the president’s betrayal of his oath of office? Betrayal of our national security and betrayal of the Integrity of our elections, I’m at here, but she says the president’s actions involving this phone call with Ukraine’s new president, bring up Joe Biden and holding hundreds of millions in USA that all of it made this. She says unavoidable admission that he talked to a foreign leader about investigating his political rival. That is what broke the dam here for Pelosi and scores of other Democrats tonight at least 181 members more than 2/3 about Democrats now say it is time you impeach David, Bruce, leaving a song ABC News, YouTube channel, you like to get more, video show, highlights and Watch live event, coverage click on the right over here to subscribe to our Channel and don’t forget to load the ABC News app for breaking news alerts, thanks for watching The president has said he will release an unredacted transcript of a call with Ukraine’s president, in which he acknowledges asking for an investigation into Joe and Hunter Biden.