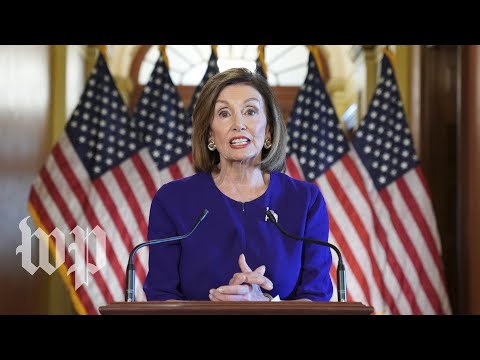 Nancy Pelosi’s evolution on impeachment Nancy Pelosi’s evolution on impeachmentI’M announcing the House of Representatives moving forward with an official impeachment inquiry. Speaker Nancy Pelosi has officially announced a formal impeachment inquiry into President Trump. This is a dramatic turnaround from the Democratic leader who has pushed off calls for impeachment for a while. So what changed impeachment enter the realm of possibility after the 2018 midterms, when Democrats regain control of the house and could, in theory lead the way introducing articles of impeachment speaker of the house. She made it clear very beyond that she would approach the issue with Extreme Caution, but that again, impeachment is a divisive issue in our country, and let us see what the facts are, what the law is and that the time most Democrats were waiting to hear the Impending results of the Mueller report, what comes back with information? I don’t think we should impeach a president for political reasons, and I don’t think we should not impeach a president for political reasons, but you have to be Ironclad in terms of your facts. As a veteran of congress’s, lower chamber, Pelosi said she wanted lie on the money already open Congressional investigations into Trump is businesses and his campaign, or nothing? No, it’s not that it’s a path that is producing results and and gathering information, and she deflected comments on impeachment by calling out transactions instead, I think the present everyday gives grounds for impeachment in terms of his obstruction of justice. Is it master of distraction? We will all agree on that. Even has more Democrats sound of their cries for impeachment proceedings. Pelosi continue to hold back. Yes, there are some more of a fuss about it’s about investigating it’s about litigating, it’s about getting the truth to hold everyone accountable, the facts and the law. That’S what matters? Not politics, not partisanship, just patriotism. Eventually, the question of impeachment Pelosi at odds with more Progressive members of the house. We won’t proceed when we have what we need to proceed not one day sooner and everybody has the liberty and the luxury to espouse on position and to criticize me for trying to go down the path in the most determine positive way, but she still maintained her Position I said I have said what I’m going to say on the subject. That’S it we’re here to do, for the American peep heart comes after reports of a phone call Trump had with Ukrainian President. Vladimir zelenskiy Trump allegedly asked him to investigate Hunter Biden. The son of former vice president in 2020 presidential candidate, but Pelosi, is so cautiously moving forward. The actions of the Trump presidency revealed dishonourable fact of the president’s betrayal of his oath of office. Betrayal of our national security and betrayal of the integrity are elections. House Speaker Nancy Pelosi (D-Calif.) called for a formal impeachment inquiry of President Trump on Sept. 24 after a long history of quelling impeachment calls from her fellow Democrats. Read more: https://wapo.st/2mtMnOI. Subscribe to The Washington Post on YouTube: https://wapo.st/2QOdcqK

What Biden’s statement on impeachment means