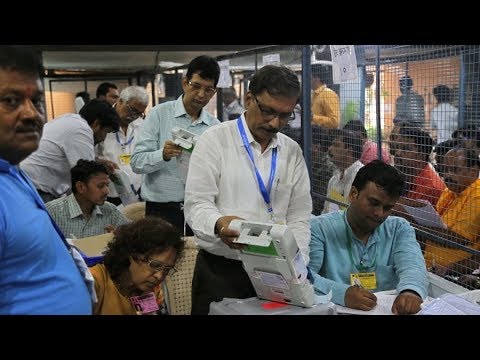 Narendra Modi’s party claims victory in Indian election Narendra Modi’s party claims victory in Indian electionPeople celebrating, although be it quietly outside party headquarters, went into the night. India selection has been no small undertaking. It is the world’s largest Democratic exercise above 900 million eligible to vote, and many did. The voter turnout, 67 % the highest in India’s history, seems to cover the election campaign and now sums up the results from New Delhi actually pointed to this kind of Victory. There was still some skepticism as to whether those numbers are correct and if you kind of imagined, obviously it’s some of that skepticism being on the opposition side. But as you say, those numbers are coming in in line with what we heard on son and people here from very early this morning. Who are supporters of the ruling party BJP we’re out celebrating already, even before the numbers have started rolling in in a serious way. So at the headquarters, the BJP headquarters add some of accounting stations. Just ordinary people, supporters coming out handing out sweets, setting off firecrackers and saying that this isn’t just a victory for their party, but also a victory for India. That Modi was the lead; they wanted to leave them in the next 5 years. He was the campaign, he was the slogan he was the manifesto, so he painted himself again as being a common man that he is self-made, that he is Auntie Elite and also nationalist with all of which play very well among his traditional, based importantly, actually that he Described himself as a security guard for the nation that seem to have residence among voters – and this all started actually with call was that suicide bombing in Kashmir in February, where 40 Indian officers were killed and afterwards, he decided to to call for air strike on Pakistan. Died in retaliation, calling himself. Security guard ever since it has played well with it with the electric and also people on the ground, telling us that they appreciated some of the things that he had promised and at least have has made some progress towards implementing bike. Fighting corruption or helping a ordinary people with building public toilets are electrifying remote Villages. Those are the kinds of things that people brought up when we asked them why he would be the best prime minister, and all of this of course means that is only now halfway and what will be a decade, at least of Modi rule of stewardship, of the World’S largest democracy, so for many people that is of great concern here, but for many other people here is all calls for celebration. Indian Prime Minister Narendra Modi’s party claimed it had won re-election with a commanding lead in today’s vote count. The CBC’s Nahlah Ayed reports from New Delhi on the world’s largest election.