Navarro slams Jay Powell amid feud between Trump and Fed 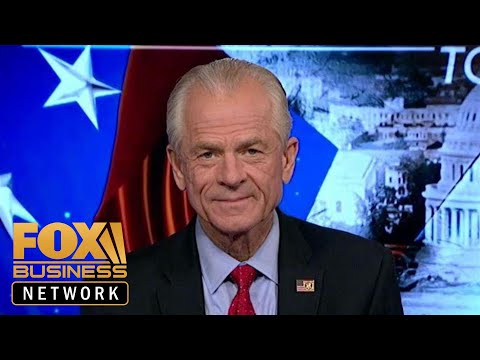 Navarro slams Jay Powell amid feud between Trump and Fed Navarro slams Jay Powell amid feud between Trump and FedAssistant to President Trump for trade and Manufacturing policy with Peter Navarro Peter, it is good to see you he came in and everybody was kind of exciting cuz. This is GEICO’s Real World experience and yet the guy was real world experience. Now the President says you know really don’t get how the world works, everything wrong way: Corrigan who ran the other way and scored the touchdown for the other team, that’s what Jake Paul’s doing it and here’s the analytics of why President Trump is rightfully angry at pow. When you prematurely and fast raise the rates and interest rates, what that has done over the last year’s drive up the value of the US dollar relative to other currencies? What does that mean for Americans means our exports way more expensive? We have Les exports slower growth and people throughout this country predict lean manufacturing. I have fewer jobs and – and what’s interesting to me, Trish is Listen to. I listen to all these Boards of Governors and, if you went to their counterparts in the European Central Bank every one of those understands that when you have interest rate policies you’re effectively setting exchange rates, no one on the American fed seems to understand that everybody, European Central Bank: that’s in there just there playing chess, we’re playing checkers and Nvidia. Look it’s the difference between a very strong Trump economy, with growth, around 2 % versus a great Trump economy at 3 % is costing us a full point of Grove and shame on him. Will complement, hear you’ve been talking about China and the threat of China forever, but I would go back to interest rates Q2 numbers. We will out 2/3 of a point due to a decline in exports and another third of a point because of the effects on on investment. If you look at when he start with 7 interest rate hikes, he’s responsible for four of them, if you look when he started raising those rates, the dollars fight over that. Time by almost 10 % again, I understand when they’re cutting rates and doing quantitative easing they’re. Basically, basically, lowering their currency, doing a competitive devaluation and wrong way. Corrigan at the Fed running in the opposite direction, scoring a touchdown for them. The president doesn’t have the authority to do that, but that you don’t look here’s the issue. What’S look forward now we got at least one., what’s Firex or or the Shoulda Woulda Coulda game. What I can tell you is this: we got at least 25 basis. Points are out of the Fed. So what needs to happen in the short run in terms of getting to 30000 on the dab? Getting you are 3 % growth rate. Things are first and foremost in the next 30 days should be passing the US Mexico, Canada agreement. That’S a full point of growth alone: 75000 Auto jobs over hundreds of thousands of jobs. We get that if we get a fiscal stimulus in Germany, which I think is an increasingly likely hit, so they buy more of our exports and it if we move forward on these fronts, like the president has been moving forward, I think we’re going to have a Very strong Outlook: what is there to complain? Four Points in the policy. Compasses is deregulation, cutting taxes, basically having the trade reform and cheap energy, and he is pursued that he’s been extremely successful. That’S why, if you think about like the Democrats Counterpoint they would, they would go in the opposite direction of everything. So, in a lot of ways, what we’re having here is the debate about where this economy is going to go when you can’t be present, transform you it’s a beautiful thing. I know you’re in the middle of negotiations with China and you don’t want to disclose much, but any hints. No, I think it’s important important that you get that done. Economic adviser to President Trump Peter Navarro blames Jerome Powell for the current state of the US dollar and said he wants the USMCA to be passed as soon as possible.