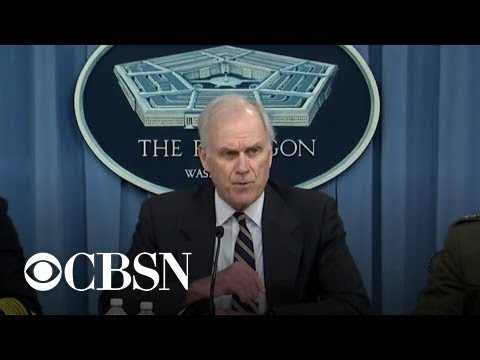 Navy secretary fired over Navy SEAL war crimes controversy Navy secretary fired over Navy SEAL war crimes controversyTop stories today, in case of an embattled Navy SEAL that pitted the president against the Pentagon and resulted in a top officials removal, maybe secretary Richard Spencer, was fired. Yesterday, the dispute centers around chief, petty officer Gallagher over the summer, the officer was acquitted of a series of war crimes in Iraq, but he was convicted of posing for photos with a dead fighter who Gallagher was in demoted, but President Trump reverse. That decision, letter Spencer, says the president gave him an order that he couldn’t in good conscience carryout. So David Martin joins us now from the Pentagon, so David. This story needs to be sort of flushed out because it’s confusing Spencer’s boss, defense secretary Mark esper, says he’s fired Spencer because he lost trust and confidence in him due to his lack of Candor. But this case of the Navy versus Edward Gallagher has now become a full-blown Fiasco, complete with conflicting accounts of why the secretary of the Navy had to go was fired today. After denying reports she might resign over the. I have not threatened to resign. I am here. I work at the pleasure of the president defense secretary Mark esper said that Spencer had gone behind his back to negotiate with the White House on Waze to short-circuit disciplinary proceedings against last week. The president tweeted, the Navy, will not be taken Gallagher’s, Trident, pin the symbol of his status as an elite Navy. Seal Spencer said he needed to see an order in writing from the president before stopping Gallagher’s appearance before review board. That could have kicked him out of the elite unit if the president, before he could embarrass the president by resigning on principle, he wrote. I cannot in good conscience, obey an order that I believe violates the sacred oath. I took President Trump tweeted. He was not pleased with the way the Navy handle the Gallagher case and was Spencer’s inability to make cost overruns on big-ticket items like a new aircraft carrier that capped a day in which Gallagher appeared on Fox News and made openly insubordinate statements about his Superior officers. This is all about ego and retaliation, nothing to do with good order and discipline. So David. Is it unusual for a president to be involved in a Military Officers, discipline and making some public as well? I’Ve been covering this beat. I’Ve never seen anything remotely approaching this, because the president intervened, in this case at least three times, and he did it very publicly. First, he ordered Gallagher release the brig. While he was waiting to go on trial on a charge of murder, then after Gallagher was acquitted of the murder charge but convicted of posing for that photograph with the search Fighter, the president, throughout the sentence against him and ordered him restored to his full rank. Then, when the Navy decided to take the Gallagher to a review board, that would take away his Trident pain, which is the symbol of the a Navy SEAL. The president intervene for a third time and said: no, you will not be taking away. Is Seal. I’Ve never seen a present reach that far down in the military Justice process to retire on November 30th. The review board was scheduled for December. So if the review board and going forward, he would have been extended on active duty, so he could face the review board. It now looks like he will be allowed to retire on November 30th and when he retires, you will be wearing that trident Ben David Martin. Thank you very much. Navy Secretary Richard Spencer has been fired over his handling of the case of Navy SEAL Edward Gallagher, who was tried on war crimes charges earlier this year. CBS News national security correspondent David Martin joined CBSN AM with the latest.