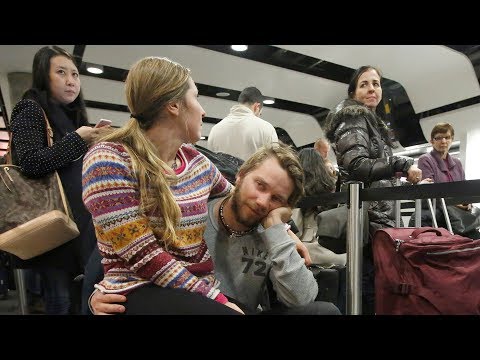 New airline passenger protections kick in New airline passenger protections kick inStarting today’s some of the things that turn a travel headache into a nightmare made staying quite so much over books will have a better chance at compensation. The fur age of Canada’s air passenger Bill of Rights is now in effect, is Hannah. Fletcher tells at some welcome the new rules, but critics – I don’t go far enough. It’S frustrating it this weekend or Airlines. One of his Planes had a mechanical issue relating to significant delays in Edmonton and Toronto to like 40 minutes before boarding. I said it was delayed by 12 hours and all-too-common complaint cancelled 30 flights, mainly due to maintenance problems and Sunwing passengers have filed 48 complaints since May 1st over flight cancellations, jurors would rarely see compensation, they have to dig through the airlines own rules, and I make A formal complaint to the Canadian Transportation agency optimistic, the passenger Bill of Rights will help improvements. There willbe compensation for delays and cancellations luggage up to $ 2,100 in compensation and up to $ 2,400 if your bumped from a flight, but one of the most outspoken Skeptics in the end of three calls the new regulations deceptive. He claims the new policies, give too much leeway to Airlines like allowing for tarmac delays of nearly four hours and not forcing Airlines to compensate for cancellations due to whether he’d rather see Canada follow your ass model. If you show up at the airport for your flight with your travel documents, with your confirm booking on time, and for whatever reason do I get on the plane, you get compensation. Air transport Association, which represents Airlines, is taking the government to court and until there’s a ruling, Canada’s major airlines all say they will comply with the new rule. So that is a look at the first phase of the air passengers Bill of Rights. Other rules won’t take effect until December, so Scott’s here to go over what’s to come in December and it supposed to be December 15th right. The China standardize the entire Airline experience Airlines do deal with certain in a natural issues weather. That’S what I think so they’re trying to make sure that the communication here is all settled in their passengers can expect reasonable delays and not take a look at some of these three points and it will be initiated in December as well with their so-called Phase. 2 of the airline passengers right Airlines must compensate for delays and cancellations or disruptions delays, cancellations. An additional $ 1,000 potential is Wallace a hotel food, drink and rebooking charges all included on standard treatment for delayed passengers is 3 hours, except air conditioning form of consent and communication. Little bit more sort of regulated from what the airlines are supposed to tell their parents at no extra cost as well. So this kicks in Phase 2 and no one of course wants to be stuck in a Tarmac for 3 hours plus in so that’s what this is designed to prevent, whether it’s an overreach., That’s yet to be considered here. But another issue here is so-called situation Within Airline control, our weather delays beyond the control accident passenger disruption self, as this bill third takes place where they expect more push back for the airlines. As far as saying that they are dealing with the elements elements with their weather passengers that the you know, that’s going to be able to key phrase whether these situations, you complained or with an Airlines, control regulation, is going to increase their cost and the cost will Be passed along to us, which is not as though they’re already Airlines. The is just as far as trying to initiate these rules. It’S going to take time to communicate. Two passengers is going to time to get to resolve these these passengers, the load them back. In again, and so there’s going to be lots of time spent dealing with passengers above and beyond what they do already and they’re the Arabic needle and Industry is going to be. That’S can be a little bit costly and we might have to pass that along pass. Music McKenna is the president and CEO of the Air transport Association of Canada joins me from his home and auto at. Thank you for your time today. First, you have said that the compensation is high and the new rules are outrageous. Why well outrageous, and that those conversations very high – let’s put this in perspective? Yes, when they aren’t, they are events that are very rude, and this will lead to an increase in the cost of traveling passenger cost. Reading an airline is going to increase the cost to fly, and I think they’re, quite strong and, and course our complaint is not that these rules exist. It’S just that they’re being pushed through the through eye without being properly worked out through before the election, and we’re saying you need to work out. A lot of details are unclear and if you look at that, they are tubing. Well draw your own conclusions about that. Develop there’s people to train as a whole lot of things to consider, especially on those international travels where you may travel on Mini Airlines with the same ticket. So how does that work out? So there’s a lot of things is a year 2 years to sort out these things that make it work, and this case they gave us two months to get this going and and they’ve extended it to Six Flags or seven months. For some elements, I’m just getting out of there rather than getting out there right, Airline passengers have new rights starting today, as rules from the Canada Transportation Agency that have prompted backlash from industry and consumer advocates take effect. The rules require airlines to meet certain obligations, including clear communication to passengers about their rights and timely updates for delays or cancellations.