New migrant caravan forming could be largest caravan yet 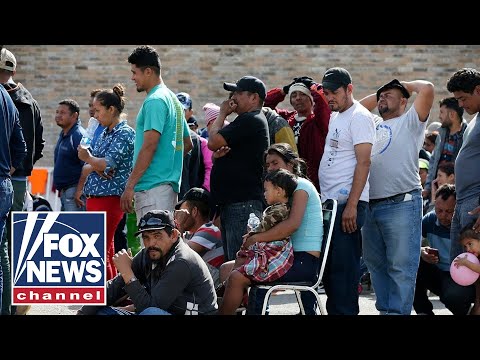 New migrant caravan forming could be largest caravan yet New migrant caravan forming could be largest caravan yetThousands and thousands of people coming from Guatemala from Honduras and El Salvador and they March up through Mexico and by the way, if we didn’t have walls in those areas. In some cases that we put in many cases where we reinforce in many cases, where are great military, helped us with barbed wire, you would have people pouring in that foreign. Well, that was a president I’d, spelling out the dangers that are involved inside these Caravans that make their way from Central America through Mexico to our Southern border tonight and Ingraham angle, exclusive, of course, that our next guest says could be the biggest yet exclusively Guatemalan. Secretary of intelligence, Mario, I need to know here: menu you’ve been warning about this for years. Actually, but a lot of people think about Central America. I’Ve been there a lot that you know a lot of time in Salvador and Guatemala. When will help from my friends and then guata or El Salvador or Honduras, why the transit Allowed by the people from Honduras with the Caravan start, you guys will let them through their making way up to Mexico y. Thank you for having me Laura. I think it’s not completely correct to say that we’re just allowing them through Guatemala signed with different countries of Central America treaty that allows American citizens to close through Central American territory, however, under the condition that they that they report at the border. Now this is a different situation, what happened overpowering of our police forces and of our border? Unfortunately, these people decide that the organizers of this of this Caravans put little kids, babies, women and the elderly the front and started pushing them against our police force. We need to take care of their human rights on their Dignity of their lives and obviously we had to eat. Was he there the lives of those people of those innocent or allowing them into into a Mayan territory? Now we need an effort and personal morality proportions to set up all these different checkpoint and we ended up returning more than 6,500 endurance back to Honduras that we’re illegal in Guatemala. In these Caravans hundred suspects back in the fall, they were not part of the Caribbean. That was, that was erroneously reported, but they were arrested in Guatemala. Trees that are switching Sicilian with links possible length through the Caravan other people can slip, and we know MS-13 has slipped into the Caravan and cartel many cartel forces have made their way into Caravans in Mexico that the reports were getting her only the threats and the Risks that come with this Karen’s right think about about the mess they have been weaponized, these poor people. This innocence have been weaponized as literally a public political tools, socialist movement throughout Latin America that are coming towards you. It an Elmo cake, Mojica he’s in Mexico and they’re part of the coaching squads who who coach everybody to say they have a credible fear. Why is Central America being depopulated activist leftist activist, where the purpose of undermining I really wet, when I seen these people in need, offering them a false opportunity in the United States and they’re falling for it, Panama, Panama, we shared a video ready with some people’s. Well. That’S their purpose, that’s what how many people they want to put again weaponize, like I said with, but by this watches movement. This is what he says about our wall and whether there’s any crisis. Let’S watch Leaf round on Republicans. You just get one instance: how about sending troops down Caravan coming, sending troops down and we can go on and on and on stand by into me, you see what you get with Trump Caravans. There’S no crisis. Did you see it as a crisis in Guatemala with people coming through and what we definitely was a crisis for us we had to. We had to deployed over 3,000 strong police officers, military EMTs First Responders in trying to stop these illegal flow of Migrant and we have to check on them and make sure that they were they were perfect, but thank you for joining us. I really appreciate it. Guatemalan Intelligence Secretary Mario Duarte weighs in on the latest caravan and what Guatemala is doing to protect and control the movement of these migrants.