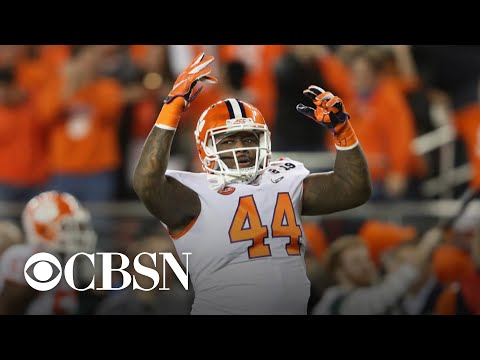 No. 1 Clemson kicks off college football’s first full weekend No. 1 Clemson kicks off college football’s first full weekendWhat college football season in the first full week of games is upon us. The Clemson Tigers headline tonight’s plates and defending Champions are led by a rookie quarterback Trevor Lawrence Sentai 44 to 16 in the national championship game to win their second title in three years, so unfamiliar place. The ap’s preseason number one team in college fall rider for cbssports.com and he joins us now. So we chipped. Do you think that cleanses should enter the season as a favorite Ben is so good football NFL teams are believing he could be ready to play in the pros today now because of those rules regarding pesky amount of time that you have to spend outside of your High school graduation, he does have one more season, NFL draft, it’s important to remember that he’s a human being and he still needs to mature a little bit as he gets more comfortable under Center and he is surrounded by the most incredible etn at running back all He needs to do is just maintain that poison, that composure and Clemson absolutely should be the favorite to win the National Championship in what could be, or would be their third title in four years. You say that he needs to develop a little more, I’m a mom who says he needs to get his education before he develops little more. I expect him to dominate on offense, but we’ve actually had some news this week, which does bring up a big concern. For me, in the Crimson Tide. Dylan Moses was a unanimous preseason All-American pick at linebacker on the defensive side of the ball. He is out for. Are you going to have to undergo knee surgery, and so they got Tua tagovailoa their quarterback, a player whose going to be winter a year ago? And so I think, every single time, Alabama’s offense is out there. If they’re going to be able to score a touchdown. Is that defense going to be able to hold up when they’re already haven’t injuries there already got Dept concerned until I expect him to dominate offensively big concern at a big For Alabama is whether freshmen and sophomores earlier than expected. Because of injuries? Are they going to be ready to contribute at a high level at the end of the season? When were talking about the SEC Championship, game college football, playoff Alabama has dominated in the big picture every single season very, very thin margin of error, because those injured or even I didn’t even show up in the AP Top 25 – and not only that. But they only got one point in the preseason AP voting. That means only voters even. in the country – and I understand, there’s a lot of disappointment and a lot of people are putting clay Helton on the hot seat, they’re wondering if he’s the right guy for the job, but I believe his hire of Graham Harrell at offensive Coordinator is going to speed up plays. That means Talent is going to win out over time, so I’m very, very bullish. On UFC. I think that that is a group Las Vegas, win total has them around 78 wins. I think this is a double-digit win team, in Los Angeles, I think not on the doom-and-gloom. Usc will be a big surprise, Oklahoma, quarterback, Kyler Murray this year, the Sooners should he be the Heisman favorite this year. At this point you should not be, but he is my pick and it’s so interesting because Alabama and I totally understand but money is with Jalen hurts. I think it is one of the best stories in college football. He lost the starting quarterback job and now he’s getting another Heisman Trophy or head-to-head against them for a national championship. There has been so much work put in by her to develop himself as a passer to improve his game so that he can make himself more ready for the NFL got to spend a lot of time. Alabama program during last year’s college, football playoff run and a business-like approach that he’s taken to his academics into improving himself as an athlete and has a football player. I think it’s all going to show up in a big way when he goes out there bro. So he’s not my favorite, but he is certainly my pick to win the Heisman trophy for the college. Football player mentioned Oklahoma right there. I do believe they’re going to win those expectations and they’re going to be in facing Oklahoma. I think we do get the Alabama Clemson rematch, but it’s not going to be in the national championship. Game Alabama, Oklahoma Jalen hurts team against his old teammates and I’m going with the Sooners to win so close. They were head-to-head with Georgia in the Rose Bowl right there when Baker Mayfield quarterback in the semi-final losses, I felt like Oklahoma was right there, I believe in Lincoln Riley, I believe in this Sooners program.. I think this is the year they finally break through and win. The national championship Arena The defending champion Clemson Tigers open the first full week of college football, looking to defend their title and stay atop the AP polls. CBS Sports’ Chip Patterson joined CBSN with a preview of what to expect from the country’s top teams.