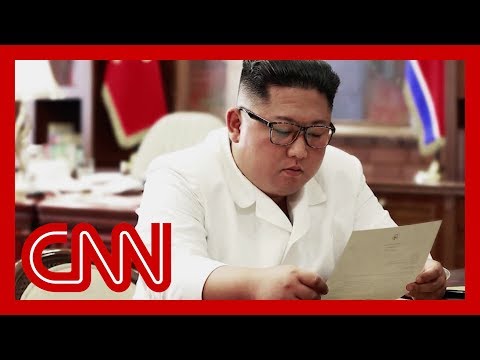 North Korea praises Trump’s ‘excellent’ letter to Kim Jong Un North Korea praises Trump’s ‘excellent’ letter to Kim Jong UnPresident Trump is touting his relationship with Kim Jeong Hoon after exchanging letters with a North Korean leader Ryan has been looking into this. For us O’Brien are they more than simply penpals? They could be more than President Trump and Kim Jeong. Hoon are now talking about the latest round of letters they’ve just exchanged. This comes at a critical moment because pressure is building on both men to kick-start the stalled negotiations over Kim’s nuclear weapons. Tonight, the bromances back on between President Trump and his pen, pal Kim Jong on the North Korean dictator, was photographed reading a new letter from President Trump over the weekend, I’ll, let her Kim’s news agency says was up excellent content, noting that Kim appreciates the political judging Faculty and extraordinary courage of President Trump today the president appear to confirm that letter as well as one he says he received from Kim just a few days earlier birthday wishes, but it was just a very friendly letter. Both ways is there Summit collapse in February. It would create the right atmosphere for another Summit having another meeting between Kim Jong Moon and President Trump will require a lot of diplomacy, not just exchanging letters between the Diplo. I’M two sides, but both sides want to be able to move past the failure of Hanoi at that Summit. In late February, the president walked out after Kim, tried to get Trump to drop. All sanctions against North Korea, in exchange for Kim dismantling only part, is nuclear weapons program. We asked veteran diplomats how much pressure both leaders are under not only to arrange a third Summit and get nuclear talks going again, but to not have another failure like Hanoi. Tremendous pressure went back very, very angry. He changed his team and see what’s an abject failure, so congelan and by the way, but the pressure is even more intense because of how much each leader has staked on his personal relationship with the other. There have been at least nine personal letters between Trump and Kim Jeong Hoon since early last year. It’S unclear exactly what was said in the what they spurred momentum for historic diplomatic breakthroughs to Summit and a personal Dynamic. That Trump has often bragged about, and then we fell in love. We’Ve put tonight analyst worried that disarming Kim’s nuclear Arsenal is now too dependent on the personal Dynamics between Trump and Kim and the pressures on both leaders to strike a deal or grow. President Trump will be eager to tap progress on a nuclear deal during his re-election campaign and Kim analyst. A is facing his own internal pressure is in leadership in part because of the acquiescence in support of North Korea are political military leader and, as the North Korean economy continues to struggle, it seems that he’s under some pressure to deliver results, who was Kim Jeong Hoon, They’Re worried about what can happen if that one-on-one Dynamic simply doesn’t work. If it breaks down, they say, then the personal diplomacy could lead to personal animosity between the two that could lead to the fire and fury rhetoric of 2 years ago, possibly put the two sides again on the brink of military hostility. Wolf Brian! Are you getting any other indications that momentum is actually building for 1/3 Summit between the president and the North Korean leader? We are getting those indications tonight. South Korea’s president has announced that President Trump is going to go to Seoul right after he goes to the G20 Summit in Japan. The president is going to arrive in Seoul this Saturday and he’s going to meet with South Korean president moon jae-in on Sunday. That could be a critical meeting to either get some real. I’M going for a third Kim Trump Summit to actually announced that there’s going to be a very interesting indeed and enormous amount of state right now, Brian Todd good report. Thank you. North Korean leader Kim Jong Un received a “personal letter” from President Donald Trump, according to North Korean state news agency KCNA. CNN’s Brian Todd takes a closer look at the relationship between the two leaders. #CNN #News