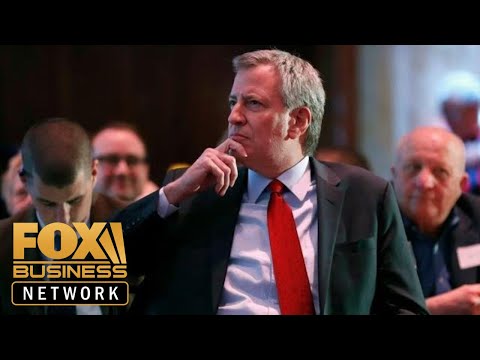 NYC Mayor Bill de Blasio ends his presidential campaign NYC Mayor Bill de Blasio ends his presidential campaignBreaking news Bill de Blasio is dropping out of the presidential race, we’re just getting this news right now Bill de Blasio. The mayor of New York is saying that he will drop out of 20 20 and it’s inevitable Maria, that its fins as social as supporters, and can it’s like the Blasio it’s going to move most likely to Elizabeth Warren, maybe a bit to Bernie Sanders. I think it’s inevitable that Joe Biden continues to drop in these bowls Biden. Cat get the it mean, there’s a big issue about whether Biden can ever get a majority of those two orders. The Blasio supporters are going to go to someone who’s a True Believer and not to someone who might be pretending a bit along the way. His managing of New York as well Orton versus Joe Biden, Democratic Party cuz, he’s a disaster, a giant Walking Disaster that even New Yorkers hate until again blackout in New York and he’s in Iowa. His support in the latest Fox News poll was less than 1 % and I would argue that him staying on the stage again. He was not at the last debate that his presence and the race hurt. The Socialist would heart a Warren or a Sanders, because New York City is a socialist City and he is a walking example of how socialist policies sale the most vulnerable, how they sell those who are most in need and how a politician, who only cares about himself, Which is essentially homelessness, public housing, taking care of children in mental health failure, failure, failure, failure, but he’s not running for president anymore. Failing at that, to that, there is crisis going on in our cities, and New York is only going to get worse because, as I have reported on this program, a big portion of the inmates at Rikers Island are going to be released at Rikers. Island is going to be closed. This is married to rose plant social New York City Mayor Bill de Blasio has dropped out of the 2020 presidential race. American Conservative Union chairman Matt Schlapp and former Wall Street Journal board member Steve Moore weigh in.