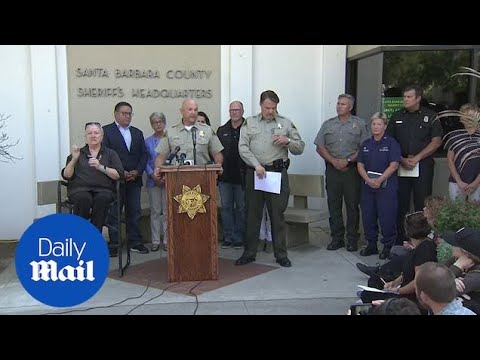 Officials announce the victims of tragic California boat fire Officials announce the victims of tragic California boat fireThis isn’t a in the morning, but I think we all should be prepared Wellness. If you could. The incident began at 3:30, a m that was from a commercial off the coast of Santa Cruz Island cruise from the Coast Guard, the Ventura County and and the Coast Guard aircraft, as well as boats and located only involved in flames in the play area. On the Northside of Santa Cruz Island, the crews were actively fighting a fire, and I, when the vessel began to this morning, the on-board five victims were subsequently rescued and during the initial response, 2 Ventura Harbor Dems have been recovered thus far as deceased. They have been transported to our Corners Bureau week. Female rescue and Recovery efforts on the additional four victims on the ocean floor in close proximity to the vessel and speak that are working to attempt to recovery remains unstable and I’m not sure when we’re going to be able to recover as well as any more that. Maybe within the bubble, the majority of the people where the passengers on the ship and the sleeping compartment is on the bottom deck of the ship have all the sudden you couldn’t ask for a worse situation. A Coast Guard official said the bodies recovered Monday morning had injuries consistent with drowning. Rescue crews are still searching for 26 people who were sleeping below deck on the vessel Conception when it burst into flames in the middle of the night while anchored 20 yards off of Platts Harbor on the north side of Santa Cruz Island. Five Conception crew members who were awake and on deck when the fire broke out jumped into the water and were rescued by a Good Samaritan boat called the Grape Escape, Coast Guard Captain Monica Rochester, Sector Los Angeles-Long Beach, said at a 9am press conference.