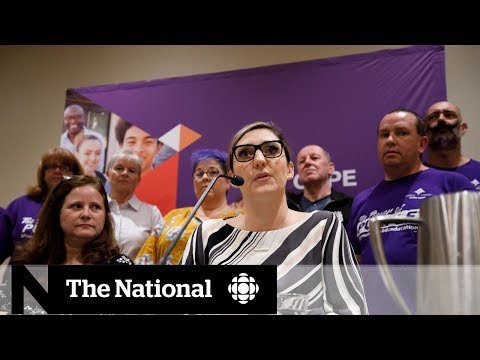 Ontario education workers reach tentative deal with province Ontario education workers reach tentative deal with provinceIt went down to the wire, but it is now done in the deal we reached. We secured a reinstatement of the local priorities fund. We were able to retain our existing sick-leave play. We were also able to achieve modest wage increases just three hours before the midnight deadline. First, the Providence. Then the union announced a tentative agreement, has been reached. The Union presenting the workers says the New Deal secure services for students working life for 55000 Education workers. That means schools will be open tomorrow, cross on Trail, North South East and West English and French at that is certainly my expectation, childcare. My daughter here is in grade A and she has special needs and she’s supported by educational assistance without educational assistance, custodians, an office administrator many school boards had plans to shut schools down for safety. Now that is strike is off the table. The question is whether it can be leveraged on the campaign Trail Ontario Premier, Doug Ford has come under Fire for education. Conservative leader, Andrew Scheer had been avoiding appearances with him for weeks, but Justin Trudeau has been trying to link the two and today he did it again you who else did that dunk board? He kept it secret from Canadians and then turned around and cut Healthcare. Had education tonight come as a relief for the conservative campaign and her parents Italia, Ricci CBC News Toronto. Some 55,000 education workers in Ontario will not strike Monday after successful last-minute contract talks with the provincial government.
Full story: www.cbc.ca/1.5310641