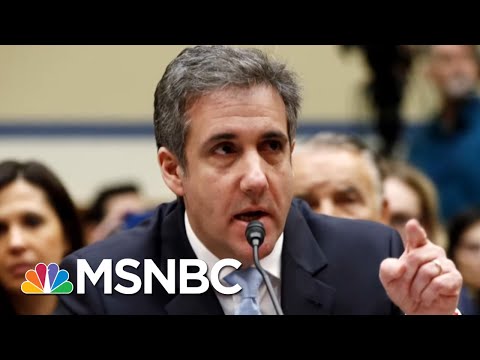 Oversight Cmte. Republicans Spend Hearing Trying To Discredit Michael Cohen | The 11th Hour | MSNBC Oversight Cmte. Republicans Spend Hearing Trying To Discredit Michael Cohen | The 11th Hour | MSNBCWelcome back to Republican strategy during Cohen testimony on Capitol Hill today was pretty simple. We did not hear a defensive their own president. Rather, the game was clearly try to further discredit Cohen and what he did to deserve. The three-year prison term is about to embark on and repeatedly call him a liar and everyone in this room to think about witness for the 116th Congress is a guy who is going to prison in 2 months for lying to Congress. Your star witness here broke the law with regards to the IRS at least five times he plead guilty on cheating on his he’s, the best witness you got here. We are today our first Pig hearing with his you and we all know, if convicted liar lying to congress with criminal you’re a pathological liar, you don’t know truth from from from falsehood. So I’m sorry, are you depressed it’s my time, that’s important to look up here on and look at the old adage that our moms taught us liar liar pants on fire liar pants on fire image for good measure of his questioning today. Still with us, Rebecca Davis, O’Brien and Kimberly Adkins, just a point of order, maybe Sherman pointed out late in the day. Their first hearing was about prescription drugs. Their second hearing was about voting rights, so this was not the first sworn witness Kim the GOP of all offense today and no defense meeting no vigorous defense of Donald Trump. What did you make of it? Clearly, the strategy by the Republicans Justin from the beginning, not based on what he said, are really before he even testifies Iran or in lieu of asking him questions. Just saying: look you or convicted of lying you’re a liar. You cannot be believed and discs discredit him entirely, as opposed to some of it wasn’t very firm and he base this connection between that Trump Tower meeting and President Trump having knowledge of it, for example, on a really fuzzy recollection by his own admission. They put him, there was actually there there for them to pick apart, but instead they went at him directly and I am not sure that was the best strategy for first of all, it loud on Michael Cohen, to that by saying you know what I see, what You’Re doing you’re protecting the president. I have a lot of experience doing that. I have done it for ten years and look where I ended up, and it also makes the the Republicans if President Trump himself is found to be like it puts them in a tough spot if they say that Michael Cohen can never be trusted again. If he’s caught lying, what would that mean about the president today about a book deal everyone who’s, anyone who’s ever smelled? Anyone involved. Kay’S? Has a book deal already. Why was there such attention on whether Michael Cohen would swear to never agree to a book deal and leaking press Torino and in trying to profit from his crimes? And so much of course you know some questions about that legally, but I think you know I don’t. I don’t entirely understand starting self, as some of the congressman pointed out today that there was some element of his own ambition at stake here in the presidency was not a boring day NBC on YouTube. If you want to keep up-to-date with the videos were putting out you, can click subscribe just below me or click over on this list and see lots of other great videos? Republicans on the House Oversight Committee aimed a lot of their hearing questions at Michael Cohen’s credibility and not at Cohen’s allegations of the president’s illegality. Kimberly Atkins and Rebecca Davis O’Brien react.
» Subscribe to MSNBC: http://on.msnbc.com/SubscribeTomsnbc