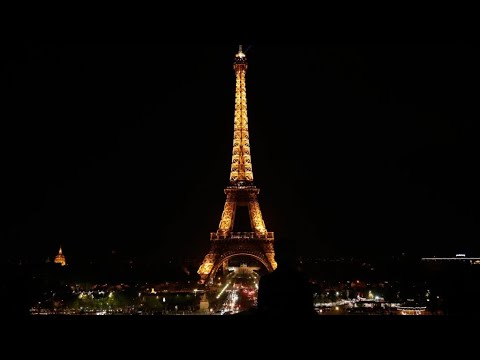 Paris celebrates Eiffel Tower’s 130th anniversary with daily laser light show Paris celebrates Eiffel Tower’s 130th anniversary with daily laser light showIt’S one of the most visited monuments in the world, the Eiffel Tower standing at 324 meters tall with 70 300 tons of iron. It’S delighted, tourists and Horizons 430 years. I think it’s beautiful and very symbolic, even though I’ve seen it and I’ve been up it or we just brought some friends with us this time that I’ve never seen it so it’s their first time, which is kind of special, I’m in love with the Eiffel Tower. I’M even Eiffel Tower dependent. I left Paris for two years to go to London and when I missed it open to the public on May 15th 1889 for the universal Exposition at the time of its construction, it was the tallest building in the world. It’S groundbreaking. Engineering has stood the test of time. Some of its elevators are still hydraulic, true to their turn of the Sun. I Origins, but mechanic still run daily tests and safety checks, especially for the elevators, and you can know everything that’s happening. The cables are regularly checked and completely changed every 7 years on average, just like the exterior paint, but there have some Modern additions in mm. The structure was covered in 20,000 every hour. On the hour until 1 a.m. Daly, seven million people visit the iconic Tower each year. Subscribe to France 24 now:
http://f24.my/youtubeEN

Paris on Wednesday marks the 130th anniversary of the Eiffel Tower’s public opening in 1929 with a laser light show retracing the monument’s history that will be visible each hour from 10pm to midnight local time through Friday.