Pence calls out ‘assume the worst media’ amid whistleblower fallout 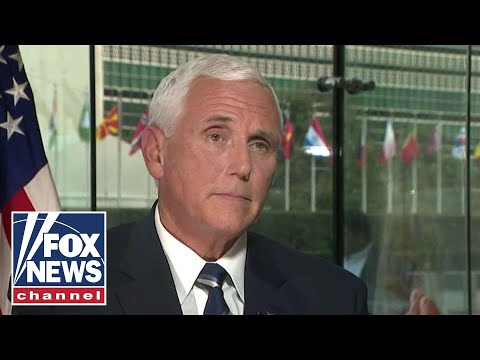 Pence calls out ‘assume the worst media’ amid whistleblower fallout Pence calls out ‘assume the worst media’ amid whistleblower falloutControversial the interview to my Wall Part 2 tomorrow and also president when I discover the Whistleblower it was not firsthand knowledge and even the media is, is now reporting in some places that it was no quid pro quo. Here we go again the assume the worst Media. One report runs with it before anybody has. The fax has been very clear on that CD give me the congratulatory call to president zielinski after his election, which was a landslide election, built largely on the message of an anti-corruption campaign. President spoke to him about our concern. Investing and taxpayer dollars and seeing him move a reform agenda. President Trump made it clear that we’ve got to see reforms. We’Ve got to see honesty in government and his congratulatory call was all about that. He mentioned Vice Pres five and his son. In the context of us wanting to see honest government, that’s exactly what the American taxpayer would expect hear you have, and maybe you can put some contact. You are over the vice president before Vice President Biden. Ragging on tape, you’re not getting a billion dollars are 6 hours and I’m leaving in 6 hours and you either fire the prosecutor. Why would the vice president want to fire a prosecutor and Son of a b they fired? Why would a vice president of the United States of America on a Ukrainian prosecutor fired? What conceivable reason would that be the remarkable that everything that the media wants to assume about the president’s phone call in July? The vice president, if I’d admitted to on camera in January 2018. But he said that when he was vice president of the United, he had a quid-pro-quo. He said that Ukrainian officials, that you will not get over a billion dollars in American Aid unless you fire a prosecutor who just happened to be investigating a Company. Vice president, what song was on the very bored of making a lot of money in oil and gas for energy? Say that’s a quid-pro-quo, but it is. The president has said in his conversation that everyone is very interested in that his conversation with with president selenski that he spoke about a congratulations he spoke about. Our support spoke about her concern about corruption, but there was no quid pro quo. People want to see a quid-pro-quo, they just need to watch the table. Vice President Biden, explaining that he was going to withhold Province, they still have. We believe Russian elements there that are fomenting violence in there trying to literally tear Ukraine apart and sober Vice President Biden, who was part of administration. It refused to give military aid to Ukraine to threaten what room unless they responded to his demand about firing, a prosecutor who, among other things, was investigating a company’s son, served on the board of the American people just deserve to know the facts, and the play can Be confident is it throughout this process that all of our Administration context of presidents conversation all of my discussions with President selenski all based upon proper considerations, how we support Ukraine, how we support their efforts to end an era of corruption in their government and Advance the Interests of their sovereignty, the American people have a right to know what happened. They were right to know what happened in 2016 and right to know what the circumstances were around having a sitting. Vice president threatened to withhold American Aid, and critics in the media are leveling at the president from this phone call and leveling it our Administration, everything that everything that Democrats on Capitol Hill are running off and describing Vice President Joe by brag about witches are the quid Pro quo, withholding American Aid in exchange for a specific action would help the president. Would you recommend he released the transcript, but remember Shawn. That would be an unprecedented act, so important. President of the United States, can have conversations with leaders around the world that are handed that are open in leaders to be concerned in the future. That a conversation with the president might make its way into the Public’s right. Under my would undermine the ability of the president to to have those discussion in the future, so I know the president would like to do it. At least I know he’s looking at it all the circumstances around it, but the American people can be confident in this congratulatory call that the president spoke about issues interested American taxpayers and notably corruption, but there was no quid pro quo. Vice President Mike Pence addresses President Trump’s call to the Ukrainian president, whistleblower claims on ‘Hannity.’ #Hannity #FoxNews