Pete Buttigieg Is Raising Serious Cash. Is He A Serious 2020 Contender? | The 11th Hour | MSNBC 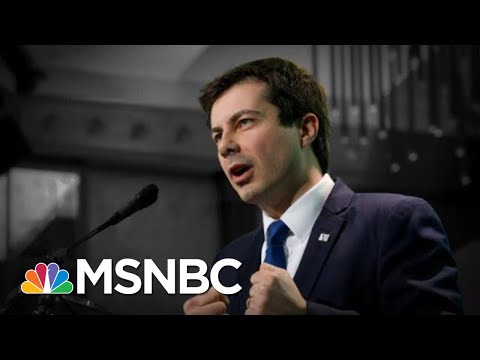 Pete Buttigieg Is Raising Serious Cash. Is He A Serious 2020 Contender? | The 11th Hour | MSNBC Pete Buttigieg Is Raising Serious Cash. Is He A Serious 2020 Contender? | The 11th Hour | MSNBCI am who I am as everybody coming into this process is, and I’m certainly passionately committed to making sure that the top leadership in this country and in our party this is, I worked hard to make sure it is in Administration, reflects the full diversity of the People that we serve diversity takes many shapes and if a millennial son of an immigrant whose a gay veteran isn’t part of the diversity of our party, that I don’t know what else I can say that was South Bend. Indiana mayor, Pete buttigieg, just left our. He posted some impressive fundraising numbers today, announcing that he raised more than 7 million dollars in the first quarter. That’S just behind who released her 12 million dollar total late tonight. We haven’t seen the fundraising figures yet from another candidate generating a lot of us, Beto O’Rourke, who formally kicked off his campaign this weekend he drew massive crowds and his state of Texas and was among seven other candidates to address a liberal. We, the People Summit today and attempt to break through the crowded field with us to talk about it all a b, Stoddard columnist of associate editor at RealClearPolitics and Kimberly and Senior Washington correspondent for WBUR Boston, NPR news station can let me start with you. First, mayor Pete has not made a single misstep anything he keeps getting better. He matches moment. He knows how to take a new cycle and and put his message with, which seems to be his story at this point in time into that new cycle really effortlessly and it’s paying off literally. It really is. I mean we are really early in the primary season that a large number of Democrats have not even begun paying attention, and so for not just one from multiple candidates. At this point to be pulling in these very, very large fun using numbers says something is good news for the parties in general for the party in general, and certainly good news for these candidate. Someone like mayor buttigieg, who does not hold Nationwide or Statewide office, someone who’s still trying to get name recognition, they’re still trying to learn how to say his name right is able to inspire people to the point that he is pulling in these kinds of numbers and They’Ve been a lot of questions about whether he has enough operations in place in early primary States in weather really play in the big leagues. But I think one thing we learned from 2016 is that convention has been thrown out of the window. You know we can talk about Iowa, we can talk about New Hampshire at the end of the day.. This is a very small percentage of all the cats will have a say in who will be the next candidate think about four years ago. Nobody would have you wasn’t even in it yet and then, even when he did get in it, people didn’t take it seriously. He certainly didn’t have strong operations in these early primary States. What happened? So I think we have to let this play out and see what happens, but I let you know also Senator Harris is pool of 12 million dollars, as well as just a big, impressive number again this early this early in the season 2 feeding. I think I would just expectations, because that’s infecting media game but breathing a sizeable amount of money at a point when the field still feels very different credit. Very truly, I mean she. She has a very focused operation that intends to get out to the right groups in the right places and really penetrate with those people and excite them there, while she’s not giving a lot of media interviews and instead of making the charm offencive splashthat near Pete, is She’S doing a solid work in South Carolina and other places to really generate enough support to make her Coalition very durable. She is also I mean I just didn’t smile her first several years in the Senate, and she turns out to be really quite compelling. I mean she, she really is. The right of the street is really smart early on and she doesn’t have to be. As those word of magnetic candidacies, exciting a lot of boys and she’s doing the hard work of the map of the early kids are putting out. You can click subscribe just below me or click over on this list to see lots of other great videos. South Bend, Indiana Democratic Mayor Pete Buttigieg has posted some impressive fundraising numbers and has continuously impressed under national scrutiny as a 2020 candidate. A.B. Stoddard and Kimberly Atkins discuss his chances in the crowded field of candidates.
» Subscribe to MSNBC: http://on.msnbc.com/SubscribeTomsnbc

Pete Buttigieg Is Raising Serious Cash. Is He A Serious 2020 Contender? | The 11th Hour | MSNBC