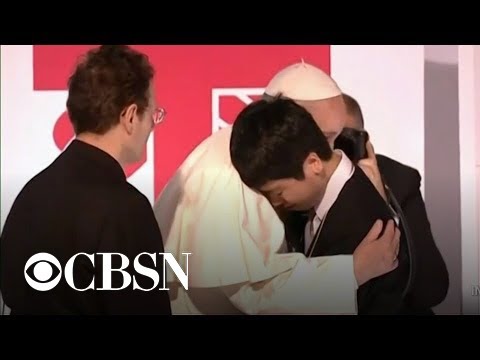 Pope Francis brings anti-nuclear message to Japan Pope Francis brings anti-nuclear message to JapanFrancis is wrapping up his historic visit to Japan. Today, he met with survivors of the 2011 Fukushima disaster and warned against. Nuclear threat has been traveling with Pope Francis she’s following the latest in Tokyo, the date of nuclear energy. In an emotional meeting with the victims of the tooth 1011, Fukushima meltdown Francis herd moving testimonies and offered words and gestures of support. Around 18,000 died after the so-called triple disaster. What an earthquake triggered a tsunami can I set up a meltdown at the Fukushima nuclear plant at the nuclear power and although the pope did not explicitly for a total ban, he said that the world needs to consider carefully. The dangers of nuclear energy, we have a great responsibility to Future Generations. He said the pope also met with Japan’s prime minister and authorities. Saying the destruct Hiroshima and Nagasaki must never happen again. On Sunday, Frances visited those two cities: the zero of nuclear Devastation there. He reiterated his position, which goes further than any previous Pope. Not only the use but possession of nuclear weapons even as a deterrent is immoral, illegitimate and perverse. On Tuesday, Francis return to the Vatican, automatron got CBS News. Tokyo, In his historic visit to Japan, Pope Francis warned against nuclear threats. The pontiff visited Hiroshima and Nagasaki, and met with survivors of the 2011 Fukushima nuclear disaster. CBS News producer Anna Matranga is following the Pope’s visit from Tokyo.