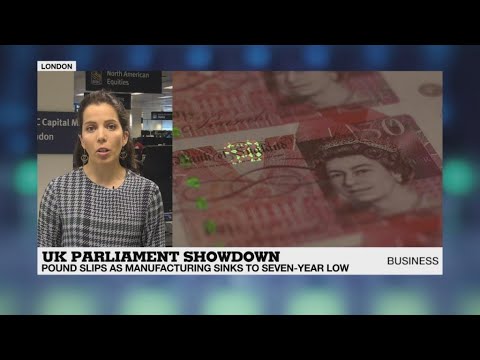 Pound flounders on Brexit uncertainty Pound flounders on Brexit uncertaintyTimer for business, so we turn to Kate Moody, Kate, we’re just gotten word in the coming minutes. We should be hearing from Boris Johnson, the UK prime minister, at a fairly Rocky session already this Monday, the great uncertainty about what is next in store for the British government agency that live shot of Downing Street as we wait for the prime minister to come up. Another major factor that we’ve been manufacturing data for the month of August. It shows factories production at dropping at its sharpest rate in 7 years in the UK at the IHS markit PMI reports suggest that European customers are moving away from uk-based companies ahead of that octo 31st brexit deadline. Business confidence also sell to a record-low 90-61 there at 10.09. It is worth saying that you are a result of dropping against the dollar part of the knock-on effect of the latest escalation of the US, China, trade War, the capital markets, thanks for being with us. How worrying is that manufacturing, slow down? It’S been confirmed today in the UK and if you look at the way Sterling swing trading at touch, you been following the political news, much more than the economic news. At the moment, 40 % of a no deal brexit, we use bookmakers odds, has the best, and I clear new proxy we have for it. It’S really a very situation having a conversation here on the trading floor and wide range of opinions with some people thinking, and it is extremely light UK government to think of potentially pulling a snap election or if we do get the rebels and Parliament winning the vote. This week, potentially refusing to implement the results of the election go to trade at the moment. How would a snap election play out on the market possibility to someone selling positive outcomes? So I’m not that certain? It would be as negative as case scenario for businesses and investors of, like absolutely does November. 1St doesn’t bring any Clarity. Video has also made it very clear that if the UK want to return to the negotiation table offer No Deal brexit, they would have to discuss the same things. I’Ve been sticking points All Along The Irish backstop. I don’t think that there is any kind of clarity that comes with a No Deal. Brexit crystallized a lot of discussing 24-hour just got time for a quick check on the day’s trading action now the week pound to see the ftse 100 Rising about 1 %, because someone to have two companies that trade in London actually make their money elsewhere. So we can pound actually means higher profits. The more modest finish their Wall Street is closed for Labor Day. Subscribe to France 24 now:
http://f24.my/youtubeEN

The pound has plunged against the US dollar and the euro, as uncertainty deepens over the British government’s Brexit strategy and the potential for a snap election. Elsa Lignos, Managing Director at RBC Capital Markets, gives us her take on the currency markets and what’s in store for investors and businesses alike.