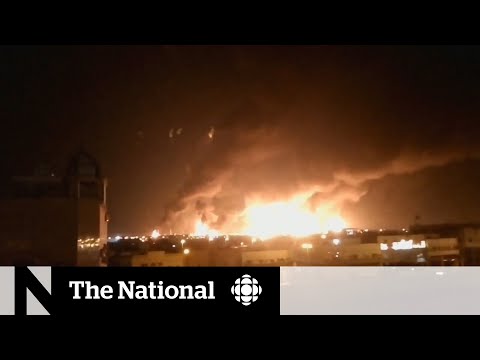 Price of oil spikes after drone attacks in Saudi Arabia, U.S. blames Iran Price of oil spikes after drone attacks in Saudi Arabia, U.S. blames IranAre the strike on that oil facility in Saudi Arabia claimed by houthi rebels? I made the suggestion it was actually carried out by Aaron. We pretty much already know today. Donald Trump was asked if indeed the US believes it was around. He wasn’t explicit, but he certainly looking that way at this moment and will let you know as soon as we find out definitively will let you know, but it does look that way with a r and denying involvement. Satellite imagery released by The us yesterday said to suggest the attacks could not have come from Yemen, but the US has yet to put forward any evidence. It was a ranian all of it in the continued Fallout over the US with from the Iran nuclear deal that tough us sanctions now re-imposed. There is that string of ships attacked in the Persian Gulf with the US blaming Aaron and that us drone shot down by Iran altogether and the other question for Trump. Is there suddenly the possibility of War or he’s not worried? We have military power, the likes of which the world has never seen. I’M not concerned that all the day after Trump tweeted that, on the matter of the attack on Saudi Arabia, that the US was locked and loaded the phrase down play today by the White House. Even as tensions ratcheted, regardless An attack on Saudi Arabia that shut five per cent of global crude output caused the biggest surge in oil prices in nearly three decades.