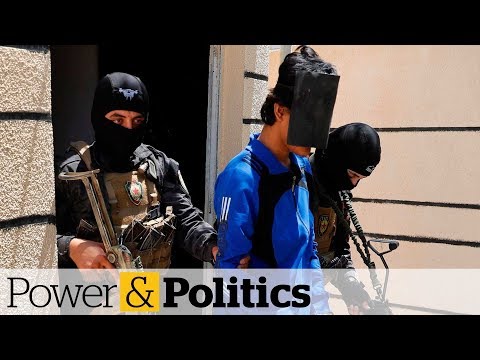 Prosecuting Canadian ISIS fighters Prosecuting Canadian ISIS fightersNearest territorial to repatriate and prosecute miniforce to release these captured individuals. Today, the Canadian government has resisted those calls but says that it’s still working together, quote usable evidence to convict and Isis Fighters war crimes investigator. An executive director of the commission for international Justice and accountability and independent group that has been studying war crimes perpetrated by the Assad regime and Isis Hunter Wiley nice to see you. Thank you very much for coming in this. Conversation has been going on, obviously politically, but we have heard from a number of experts and from the government itself is that Gathering evidence against these individuals is the bar is very high and it’s nearly impossible. Is it really impossible? That’S what you want to charge him with, so, if you want to implicate individuals and war crimes, Cards Against Humanity, or indeed the crime of genocide, that is quite difficult. There is some large trolls of evidence that we can speak about that are just now we’re starting exploit in in Syria and Iraq, but captured captured the dash materials. But if you want to do a prosecution for material support or membership, if you will in a terrorist organization which is what most country, what happened doing with returning Dash Fighters or need a treason charge a little that would be unusual. This requires a great deal less evidence effectively, except we need to demonstrate that the individual was a member of Islamic State. What’S the typical typical with Europeans is most of these foreign Western foreign Fighters for Interra spiders is usually called where social media-savvy, so they were using Facebook YouTube messenger, these these sorts of things and they would post pictures of themselves in Syria and Iraq with a Kalashnikov. In front of a Dasher Islamic state flag with their their finger in the air, doesn’t take a great deal of work beyond that to to get a conviction and of course the prosecutors will be linked to Security Services. They can get into the mobile telephones if they get their hands on some of these guys and soreness before. So these are relatively easy. I’Ll use an example to take it you’re taking. There is a TIE fighter that left here, who has a file was his name. He did a podcast for the New York Times and he has come back to Canada and in that podcast you describe killing somebody none of his proven, but but there was a question among the number of people who were listening to that and watching that. Well, if he’s admitting that, why can’t there be done something about that, how do you gather evidence on that kind of a for example, over there with that possible that particular individual or a case like that? I can speak to the particular guy, but you want to get into a social media account if he had any which end and get us get your hands on his telephones or or records linked to whatever number you had his number of investigative Avenues to follow to To an end, to a certain degree, you can use it on admissions of a killing. That’S that’s a different issue, but he has based on what he told me stated that he was a member of Islamic States who want some corroborating evidence typically or prosecutor would. But the question is: if there’s a willingness in a particular country to prosecute for material support and the willingness I mean you’re over there, your group sometimes is collecting that kind of evidence. What’S your impression overall with respect what is Islamic State fires, but certain countries very bullish, French, Germans, Dutch 2-degree, Odyssey the Americans – will they haven’t, had a lot of guys go to sonicstate, Canada? I don’t know it’s been slow Off the Mark and I can’t I can’t say one way or another, but fundamentally don’t what’s required as evidence or even to build a fairly simple case if you’re dealing with dozens and dozens of Sussex requires a lot of resource diversion From other forms of criminality, when Islamic State was still quite small in early 2014, we followed them into Iraq in later that year and we’ve had about 60 Personnel working on investigating Islamic States since 15 Source quarterback Team, Jordan Personnel deployed in Syria, Iraq and then the Analytical and and legal components are, are based in their headquarters in Europe, principally in Europe, where there’s far more foreigners or westerners went to Islamic State specially from France and Belgium suing prosecution makes a difference. Do you think that it does doesn’t send a message? Does it matter, is it voluntarily needs to be held to account for that decision, that the real challenge comes with trying to prosecute individuals for crimes Beyond Simple membership? This this is quite difficult and – and so say I alluded to earlier – we’re working with the authorities in Iraq, especially in Baghdad, where there’s a number of repositories of very large repositories of captured documentation. It was very bureaucratic. Islamic State, at its height and captured smartphones, captured the computer’s hard drives that we can suck the information out of swivel agreement with the federal authorities in in Iraq, federal government, Iraq and indeed the regional government in Northern Iraq. The Kurdistan Regional government, and so were in the process of organizing that stuff now to make it available to Western Law Enforcement. Canada has resisted calls to repatriate its citizens who have been detained abroad for fighting with ISIS, saying that it is working with its allies to gather evidence to prosecute extremist fighters.
»»» Subscribe to CBC News to watch more videos: http://bit.ly/1RreYWS