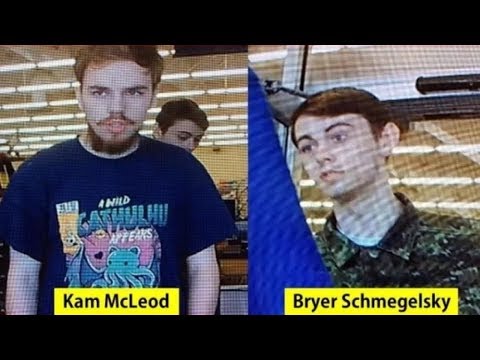 RCMP confirm two sightings of fugitives in Gillam, Man. RCMP confirm two sightings of fugitives in Gillam, Man.These sightings were prior to the discovery of the burnt out vehicle. There have also been no reported stolen vehicles that could be attributed to the suspects at this point. In the investigation we believe they are still in area. Manitoba RCMP has deployed a significant amount of resources to the area, including our Emergency Response Team, our crisis, negotiation, team police, dog services and Services assets. The RCMP major crime unit is involved, as well as the rcmp’s North District and RCMP resources from other provinces. The informational text at the intersection of provincial Road, 280 and provincial Road 290, the road leading into Gillum, continues to be in place and will be for the foreseeable future. Our officers have conducted a detailed and thorough searches. A potential error is of interest and these searches continue over the last 48 hours. We have received over 80 tips and we continue to ask the public to remain vigilant for cam McLeod and Briar smigielski. If they are spotted, do not approach call 911 or your local police immediately, and I need to emphasize that in the Gilliam area in order to get a hold of police, you need to call the number 2, 0, 4 6522200 + in the Thompson area that an Emergency number is 204-677-6911, as you can appreciate, this is a dynamic and unfolding situation. I understand that people have many questions and we commit providing answers as soon as we can.. What’S the area prior to the discovery of the vehicle. Manitoba, RCMP, Dillon, car inspection and RCMP from other provinces are also for meditating in the operation. Our police officers call nine-one-one or call your local police call 204-600-6911 going to come new questions right now. The investigation is ongoing, so we’re still trying to determine everything, and I can’t comment on that. Sorry, I missed the beginning of that. Well, right now we have police services from western Canada, close the opp, they’re all engaged and they’re all insisting in this investigation with all the tips coming in. They are investigating those and helping us. I don’t have the specifics on the numbers. I think just what I mentioned in the release that the last confirmed sighting was July 22nd and the the reason that no there been no stolen vehicles in that area as a what that time, but that’s not to say that they they haven’t left. But it’s in the Gillum area. I can’t elaborate on that. We are taking all steps to be a thorough as we can, which is why we have so many resources to Floyd, so we’re doing a lot of searches in and around that area. I can’t speak to the murder investigation in British Columbia. They will have to speak to that. I can just speak to what Happening Here in Manitoba right now, we’re still in the area and once I have more specifics or anything like that, I will let you know. It’S a large area, but I can’t speak to specifics on that’s it’s a little while if you know Gilliam there’s a lot of different areas, so I can’t speak exactly where they will be searching right now. This is very challenging terrain. This is a large. It’S bare. There’S lots of dense Bush Forest swampy areas, so it is very challenging we okay, let’s have any saved, but I’m on duty said that is your Erie difficult terrain is enlarged and a lot of swamp and Bush in the area. Right now, we’re you know going through tips were investigating everything. There’S tips coming all the time, so as part of the investigation, I I can’t comment on that is always knew I’m coming in. I can’t comment on that. I think it’s tough. It’S it’s challenging terrain! Its vast dance, so obviously, I think a lot of challenges, which is why we have deployed so many resources. You know, including the Emergency Response Team of the police officers that are up there, are trained for these types of situations. We are using all of technology and resources that we have to speak to specifics. I I won’t do that just for the safety of our other offices. I can’t speculate on that. So all I can tell you right now. Is he investigations ongoing we’re doing our best to provide you guys with the you know what the most information that we can and once we confirm more details, we will again speak to you. So thank you very much. Manitoba RCMP confirm there have been two established and corroborated sightings of Kam McLeod and Bryer Schmegelsky in the Gillam area, prior to the discovery of the burnt out vehicle.