Retrial in death of Indigenous woman 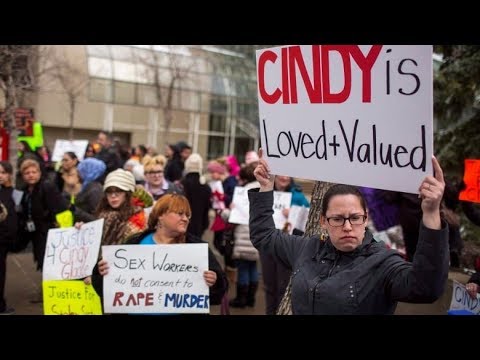 Retrial in death of Indigenous woman Retrial in death of Indigenous womanA man who was acquitted in the death of an indigenous woman will be heading back to court. The supreme court orders a new trial for Bradley Barton. He will be tried for manslaughter in the death of Cindy gladu, who was effects just a warning as well to some of our viewers, the details of this case. You might find some of them disturbing glad. You was found dead in a hotel bathroom in Edmonton eight years ago, Barton had paid her for sex and he described their sexual activity that night rough but consensual. He was acquitted of first-degree murder. The case cause public outrage over how the victim was treated by Canada’s Criminal Justice System. Here’S some of the reaction following no good answer here, Cindy glad you is mother and her daughters and her family are going to have to go through this horrific trial all over again, that’s not a happy result for anybody, but terms of the just the Injustice has That happened below the fact that the justice system will attempt to correct that’s a good thing, but there’s no really good answer here. This horror show continues. I think it’s a step forward that the court has recognized that, in cases of sexual assaults involving indigenous women and girls, that there’s an obligation on courts on judges to be Gatekeepers to ensure that bias prejudice, racism and sexism do not form part of the evidence are Not what juries and judges rely on to make their decisions. This is a big step forward in Ottowa. He has more on the reasons behind the decision. It was. A split decision affect a 4-3 decision with a majority ordering a new trial for manslaughter. Now the dissenting minority agreed with the decision to send this back to neutral, but they also wanted Bradley Burton to potentially face charges for murder. The majority disagreed so he’s going back. Simply for a manslaughter retrial now the reason for this, or because of Errors made by the judge at the original trial are the first and most significant, arguably being that he allowed the past sexual history of Cindy glad you to be entered as evidence in this case. Without holding a hearing to determine whether that evidence was relevant or whether could potentially be prejudicial, which was a blatant location of Canada’s rape shield laws, which is to protect the victim of an alleged sexual assault from having their past sexual history of potentially used against them. Dd decision to allow this to go in without any kind of a hearing in the Supreme Court has left. The meeting jury was left adrift in a sea of dangerous and impermissible inferences, so that was the first major air by the judge that the second were bad instructions to the jury, particularly when it comes to consent, Bradley Barton and Cindy glad you met for sex. Two nights in a row Bradley Barton paid her for sex both of those night, but simply because consent was given on night. One does not mean consent was given on night to the jury was not properly instructed on this. The justices made the point that consent must be specifically renewed and communicate for each sexual act. They also found there’s bad instructions, given I want Bradley Burns motive might have been, and some of his after-the-fact conduct where he gave very conflicting stories about what actually happened in that Edmonton hotel room that night so based on those Errors By the judge to allow this App has to be heard about any glad you passed actual history and improper instructions to the jury at mineral is going back to a retrial on manslaughter girls in particular. Can you take me through some of those David and one of the broader public conversations that has come out of this acquittal and end the way this trial was conducted? It wasn’t dealt with specifically as a point of Law & Order free trial, but because, throughout the course of the trials any glad you was referred to as a native woman or a native girl or any native prostitute dozens of times and that’s the Supreme Court has Found that look into the jury box – and it’s did the judge to give them proper guidelines on how to deal with cases where the victims are indigenous women and girls. So they’re right that our criminal justice system to take reasonable steps to address systemic biases prejudices and stereotypes against indigenous women and sex workers. Turning a blind eye to these biases is not the answer as an additional Safeguard going forward in sexual assault cases where the complainant is an indigenous woman or girl trial. Judges will be well advised to provide and express instruction aimed at countering. This is against indigenous women and girls, so this is a new guideline to trial judges across the country from the Supreme Court to weigh all of these factors when instructing the jury to ensure that a fair consideration of the facts as given this fight existing cultural stereotypes Against indigenous women and girls, in particular indigenous women and girls who may work in the sex ring Bradley Barton, the Ontario trucker acquitted of first-degree murder in the killing of Cindy Gladue, will face a new trial for manslaughter, the Supreme Court of Canada has ruled. Gladue was found dead in the bathtub of a motel bathroom in Edmonton eight years ago, after engaging in paid sex with Barton for two consecutive nights. The court found that “rape shield” laws were not followed during Barton’s trial.