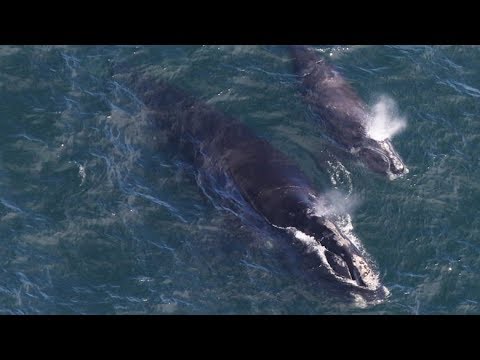 Right whales return to Atlantic Canada Right whales return to Atlantic CanadaWe have been following the story of these magnificent creatures for some time now. The endangered North Atlantic right whale there, just over four hundred of them left on the planet and marine biologists have been working to bring the species by this morning. There is some good news to share from these scientists and Brett Ruskin is handling that if one surfaces behind you there, that will be a story in itself Brett, but behind me. Yes, I certainly will I will interrupt if we do anyway, you get some good news. This morning so tell us, you’ve been covering this for us throughout, what’s the latest years ago that we asked he began talking about the North Atlantic right whale and then the place in the trouble that they are having this critically endangered species. But today some good news, Indian waters for their annual migration, begin to make their way up here and new baby whale. Seven. New calves, North Atlantic right whale calves, which is really a big deal for this season, which single animal is counted. The last count on 411 of these whales left around there they’re going to certainly update that count now so slow. They breed every once every one to three years, so 7 Cavs. This is really significant, but tell us about the you-know-what the the population has been through in the difficulties of growing this population of the species sure, yet so a quick recap as to what we’ve seen over the last couple years, 2017 this summer was an awful summer For the North Atlantic right whale, there was more than a dozen whales found off the coast of Canada. New whale carcass found floating off the coast and Sophie 2017 was bad. 2018 wasn’t great either because the whales did migrate back to Canada to the Gulf of Saint Lawrence whales found no new babies are created from this at the first Cavs that we’ve seen in the last year or two years is supposed 7 new right. Whales haven’t fought in the Gulf of st. Lawrence. Those measures to try to protect the whales are still in place as well direction for large vessels passing through the area where North Atlantic right whales are known to be found, as well as fishing restrictions in the areas where they’re going to be found, as well as A very Flex area that can be wary. Fishing can be restricted when right whales are spotted. All of this is to try to protect these whales, and the interesting thing is these new right whales, these baby right whales, were only one year. They don’t know what it was like before these restrictions came into place when it was a little bit more dangerous for well. So Canada seems like a great place now to try to rebuild this be fixed. I live in Halifax, North Atlantic right whales have returned to Canadian waters early this year, and brought with them seven new calves, according to the Department of Fisheries and Oceans.