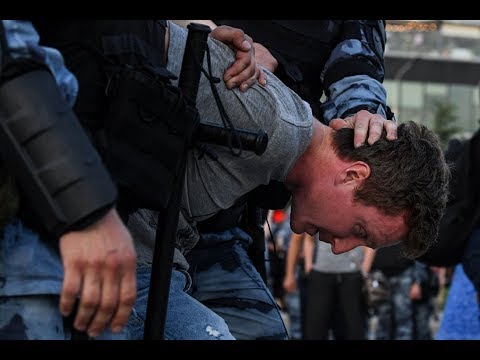 Russian police crackdown on opposition protest Russian police crackdown on opposition protestPlace in Moscow have Crackdown on an opposition, pro-democracy protests, Riot police and body armor chasing down protesters on City street and one Akron group saying nearly 700 people have been arrested. Russian officials say the protest was unauthorized now this is just the latest. Pro-Democracy protests to be held on the streets of Moscow and femoral is bringing Stephanie’s Gandara looking at what took place today in a bigger issue. So, let’s begin with the latest here: Stephanie ovd info that monitors political or they had said nearly 700, but that number continues to grow as we keep checking started near the mayor of Moscow. Xoffice people shouting things like Russia will be free. There are reports of police, beating protesters charging at the crowd with airport Andres and forcing people who are detained into buses to be taken do the police station. This is over Moscow city council elections that will be held in September. This is something that normally draws little attention protestors. Several independent opposition candidates have been looted from the ballot, they say for political reasons and that’s why they’re protesting of course, officials dispute that they say these candidates had insufficient signatures on their petitions to run now. This isn’t the first protest of this time. Last Saturday, more than 20,000 people protested. Dozens arrested then to the numbers, for today’s protests are far fewer about 3,500 people took part, but something to keep in mind this time. Please started making a rat before the protest even began even before the beginning of some of those arrested were the main opposition leaders in Russia tell us a bit more about that before this protest even started, one of them in particular, Alexei navalny. He is Russia’s most prominent opposition figure on Wednesday. He was put in jail for 30 days and he released a video on Instagram in it. You can see him here with his wife Yulia in this video that he put out on Instagram from jail. He says he came out of his home to buy flowers for you, Leah’s birthday and found himself detained in a police station. It’S actually timekeeping arrested this month. Let’S look at the big picture here. What this all really showed is that President Vladimir Putin’s popularity has dipped there is anger over falling household incomes and living standards. His approval ratings have people aren’t happy with how Moscow is being run and clearly there willing to make their voices heard. Russian police arrested more than 800 people in Moscow on Saturday in one of the biggest crackdowns of recent times against an increasingly defiant opposition decrying President Vladimir Putin’s tight grip on power.