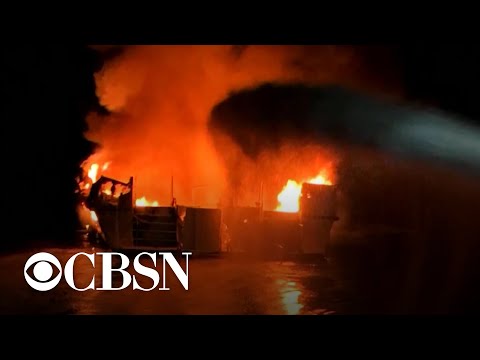 Search warrants served in California boat fire that killed 34 people Search warrants served in California boat fire that killed 34 peopleOfficials, in California, say the operation to salvage, what’s left of a diving boat involved in a deadly fire last week or resume Tuesday over the weekend, investigators served search warrants at the company that owns the boat kandiss Crone from my Los Angeles in KCBS how’s, the latest On the investigation on the business yesterday, my heart and mind, my prayers go out to the families and friends and everyone that’s affected Cindy Hernandez., what caused the fire and why none of the 34 people below deck could escape the Flames teams from the ATF Coast Guard And FBI are on the hunt for training safety and maintenance records at the boat rental company on Sunday agents hauled out boxes marked and said the company had passed all inspections. Surprise, I don’t care if it’s been certified or not a thorough investigation, see what happens from it. I I think it’s important that we find out exactly what happened lost. This is a reminder that life is very, very precious and Dallas the time to really love each other. Cbs 2 News U.S. authorities are conducting a criminal investigation into the fiery dive boat disaster that killed 34 people off the coast of California. The FBI, Coast Guard and U.S. attorney in Los Angeles are overseeing the investigation. CBS Los Angeles’ Kandiss Crone reports.