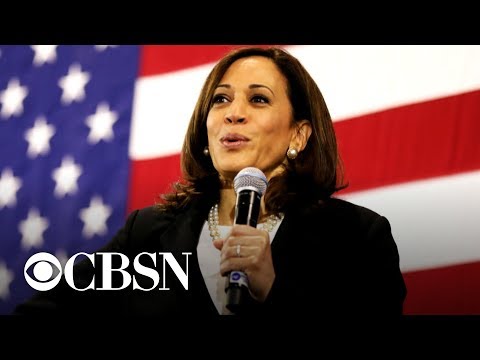 Sen. Kamala Harris unveils bill to federally decriminalize marijuana Sen. Kamala Harris unveils bill to federally decriminalize marijuanaCalifornia, Senator and Democratic presidential candidate Kamala Harris is introducing a bill to federally decriminalized marijuana. The bill is called a marijuana opportunity, reinvestment and expungement act that would remove marijuana from the list of federally controlled substances and apply retroactively to past and pending convictions. Federal courts would also be required to expunge prior convictions. The bill would authorize a 5 % sales tax on marijuana products to create a so-called opportunity. Trust fund battle through the republican-controlled Senate. Stephanie Ramirez joins me now. She, the CBS News campaign reporter covering Senator Harris. Okay, so a little confused. What’S the difference between a first thank you for having me with the bill. It’S not like she saying go light up right. What the understanding is that she’s, removing the Federal Bar so that states can more freely choose to legalize marijuana if they wanted to, then you saw some of the other things. The village dresses like a resentencing and expunging Records. That’S to address those communities disproportionately impacted by the war on drugs, and would you also should have called a tax as well and to the money that’s generated from the 5 % sales tax ruined backhoe? So it’s called the opportunity trust fund. That would have three Grant programs, and the goal here is to help those communities by different things: job training, reentry program, literacy, programs, people that hasn’t been impacted by incarceration because of marijuana, specifically in the small business owners who have been identified socially and economically disadvantaged individuals. You know when you go back and you look at Senator Harris’s record back in 2010 when she was DNA in San Francisco. She opposed marijuana in California. I’M curious Stephanie. What changed so allowed on legalized actually do recreational use of marijuana in the state of California. More recently, those Hearst begin to change in begin to change, actually legalization of marijuana for recreational purposes, but before that, especially in 2010 campaign manager at the time had quoted her as saying that she only supports medicinal marijuana and nothing beyond that, and she heard it also Said that on the trail as well, you know when you have some tissues, who has a record like this is what people cancer come back and point to different things. But you know when you look at her time of the prosecutor, points on her record kind of go against what she’s currently putting forward actually and it’s it’s a lot to go through. Actually, the Rolling Stone came out with an article on this today, but this is what she is facing because of her * 2 attorney for time is California’s top comp attorney general and she herself more recently begun to say on the campaign trail that she is not Going to apologize for her record, but we are seeing that come out and that’s what she’s going to face with her history and now for the presidency. I want to talk about her position. Medicaid Medicare! For all you know the first debate last month, she has raised her hand talking about eliminating private insurance and then later Backtrack on it. What is her campaign saying about what position is right now what she was saying along different ways, but that point that you just made. That was the second time that she has spark some confusion on her stand with Healthcare Medicare process. Paris is a supporter of an co-sponsor actually of Bernie Sanders. Medicare-For-All Bill. No standards bill would eliminate almost all forms of private insurance, although it would also allow for supplemental private insurance for things like cosmetic surgery also calls for a middle tax class hike, among other ways to to find it. But Sanders are separating herself from it saying that in the vision she sees there would not be a medical outside middle class, tax hike, and she said this on CNN last week. This is actually spark even more questions on her stands for this, so I can tell you with her rival, set to be on the big stage with her in Detroit, that’s former Vice President Joe Biden, he is calling for the Affordable Care Act and and not Medicare, For all, he wants expanded, so that’s something that we’re expecting and anticipating them a battle on when they hit the debate stage. Next week, yeah speaking of debate stage, you, our latest CBS News, Battleground tracker over the weekend, Place her and 3rd in the early primary and caucus Elizabeth Warren in California. We actually have her within the margin of error behind Joe Biden. How is her campaign dealing with this polling Booth said she seen recently? What are they saying or when they were asked about most strong who voters thought was most strongly campaign? Obviously they’re very excited about this. Our colleagues are based in Iowa and Basin. New Hampshire have been seen huge crowds, overflow crowd, going to see her event. Interesting thing that our New Hampshire campaign, reporter Dacosta had pointed out to me, was that one of the more recent New Hampshire events she was hearing Rumblings of a little uneasy with Harris on healthcare, because she’s had to so much actually got a few voters on record. Talking about this, though again something we’re, definitely going to be paying attention to next week when she, and especially face off on the debate stage. Thank you for having me California Senator and Democratic presidential candidiate Kamala Harris is introducing a bill to federally decriminalize marijuana. CBS News campaign reporter Stephanie Ramirez spoke to CBSN’s Reena Ninan about the plan.