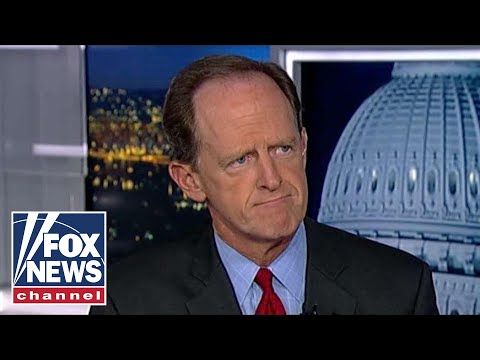 Sen. Pat Toomey details efforts on bipartisan gun control Sen. Pat Toomey details efforts on bipartisan gun controlRepublicans in the Senate vote on President Trump’s border emergency and Senate Majority Leader Mitch, McConnell pushing ahead with a potential vote on guns all this as the nation’s capital, digestive departure, National Security advisor John Bolton, much to discuss with senator Pat Toomey republican from Pennsylvania. Senator welcome thanks thanks for having me to your work, not very closely in a bipartisan fashion. Is guns only play something from your Kali Chris Coons go to the response. I think this falls under the heading of let’s enforce the laws we have more thoroughly. I cannot have another month go by where we have more mass shootings, as we did in Dayton and El Paso and Odessa in last few weeks. How are your efforts to come together with something that President Trump will sign going at this point? They’Re going? Okay, so I have had quite a number of conversations with the president himself. My staff and his staff are engaged. It’S been speaking with other members of the Senate, who are interested in. Let me be very clear that the present and I are in complete agreement – we’re not interested in infringing on the rights of law-abiding citizens. For me, this is all about trying to keep guns out of the the people shouldn’t have guns in the first place, that is to say violent criminals and people who are dangerously mentally ill. So I’d like to see us apply background checks on all commercial sales so that we can identify people who are in one of those two Cannon categories. It shouldn’t have gone to see if we can find a place where the president is comfortable, where we can get him a majority in the Senate. The discussions are still underway attack. So it’s hard to there are. There are a long list of attacks that might have been prevented had there been a background check, but people purchase their guns in a fashion that didn’t require a background check, but Mike I’ll be the first to say there is no one piece of legislation. That’S going to hand these kinds of appalling horrific Mass attacks, their there’s. No one thing we can do, but if we can make it harder for dangerous people to get firearms in the first place, maybe we’ll save some lives. Take a listen to this. The president’s National Emergency declaration is there any reason in your mind for the Senate to vote again on President Trump National Emergency at the border. I think that’s a pointless exercise. We saw how that went the last time it’s going to go to the exact same way. This time, I actually think the president is right, identify the emergency at our border mistaken to reprogram some of the funds that Congress has appropriated for military construction and to use it for a different purpose. This is been adjudicated. Schumer just wants to try to score political points and the tie up the Senate so that we can’t be doing productive things. Reaction and I’ll get you to react around the world is greatly diminished. With Bolton out of the White House, I think he had a naive point of view for the world that we should topple regimes everywhere and Institute. You know democratic governments and we would make the world perfect or, and frankly, just doesn’t work that way. It sounds like Boulton and President Trump butted heads a lot. Your thoughts on his departure, iSmart, very well-informed, very thoughtful guy. I think he served his country well, and we should be grateful for his service. Having said that, I think he had a different worldview from the president. I think John Bolton was more likely to be an advocate for using using power, projecting force and taking him or interventionist approach. I don’t think he wanted to have a war everywhere in the world and you know remake regine’s, but I think interventionist leaning than the president in at some point that probably led to this this device. Look, the president has to have advisors with whom he’s comfortable. It’S the president’s discretion Center. Discussions are underway between the Senate and President Trump on expanding background checks on gun purchases.