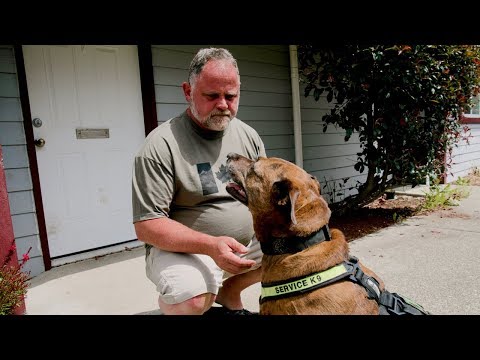 Service dogs need national certification standard, says veteran with PTSD Service dogs need national certification standard, says veteran with PTSDFor the past five years, William, Webb and Jesse have been Inseparable. Part of me receiving my dog, I was a shot in Webb, was in the military for 19 years in 2011, when a suicide bomber blew apart of bust in Kabul and killed 17 people website happen upon my return, like most soldiers that suffer trauma, we minimise and Did I what’s going on in our lives in Manitoba, which SEI psychiatric service dog to help manage post-traumatic stress disorder when web is anxious having flashbacks or night terrors Jesse is trying to distract him. She was Todd and certified by Winnipeg company that most recently provided dogs to survivors of the bolts hockey team bus crash in 2016 weapon Jesse moved to BC. I was confronted in Nanaimo at the time I would Grove, mall and told my dog could not be in the mall, because it wasn’t a certified service dog, explain that it was provided. The idea I had – and they still asked me to leave the international guide dog Federation – others have to be assessed every two years to get a $ 200 BC identification card Webb had one in 2016, but now that it’s expired, he’d rather fight. It then renew it without the card weapon Jesse if it died service on transit in BC, Aries, as well as access to public buildings. The service dog sector is quickly emerging as a highly competitive, multi-million-dollar Business. Insider, say terms like certification and accreditation are often misconstrued. That’S because no one has set standards for the industry as a whole canada-wide rules, its believe, would eliminate situations like webs territories is consistency, Alberta and Nova. Scotia have the same. Restrictive policy is BC. Prince Edward Island is considering it web wants it repealed. The process was flawed. I believe the government knows that it’s flawed, but they’re not willing to BC’s. Minister of Public Safety declined an interview, but his staff said the agency’s recognized by The Province have high standards for training service dogs. Web doesn’t dispute that, but a law that excludes all other dog providers. He says wrong: bellfuries CBC News, Courtney, Service dogs should have a national standard in Canada, says a veteran with PTSD. Differences in certification for service dogs vary between provinces, making life difficult for people who rely on the dogs for support.
Read more about this story: https://www.cbc.ca/1.5190203