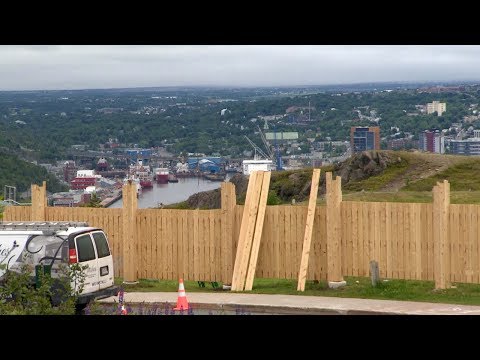 Signal Hill fence removed amid backlash in St. John’s Signal Hill fence removed amid backlash in St. John’sJust days after new fence was built along st. Johns iconic Signal Hill, it’s being taken down weather in Collective rage. Today there was a fence in the way, and you couldn’t see anything today I mean if it’s not a fence, blocking your view in St John’s. It’S the fog, you can see the whole city from here, and the issue was that yeah, the fence went up and a people went irate over. It really upset because we’re here on Signal Hill at the historic site – and this is one when people drive through here. They can, they can see the view of the city and they didn’t want a fence blocking their way. One guy came up earlier today for the local radio show Morning Show, and he told me he came up just to watch them – take the fence down because he was so disgusted by it. Now and all morning Parks County workers are here, the rain was coming sideways. The wind was really strong stronger than it is even now, and even take it down that fence is only will panels left to go this all started two days ago, when Rick Mercer tweeted took a picture of the fence and tweeted it and said you know, welcome To NL Newfoundland Labrador, nothing to see here since then a local MP Nick Weiland got involved. Can I got involved, tweets back and forth fence came down right away, and this is where we’re at right now the view is open. The poster still up, but the in-between bits are down so a lot of public pressure for safety. What’S next for Signal Hill and 2 in through here, and they talked about it being for safety. But what they’re going to do now is we’re going to have a temporary barrier, so the wood from the fence by the way they’re using that they might use some of that from what I’ve been hearing for this temporary barrier, not sure what that’s going to look. What a won’t be will be this big 10 ft tall fence blocking the view we still don’t know what’s going to happen to the post, but I mean you know, maybe, on this Historic Site, they’ll be a use for his store at historic Purvis. Is it for a memory of the great raging fence, debate 19 in St John’s, even with the fog it still looks, beautiful is very St John’s ish TV Park Canada has torn down the short-lived wooden barrier, which obstructed one of the most stunning views of St. John’s and sparked widespread community outrage.