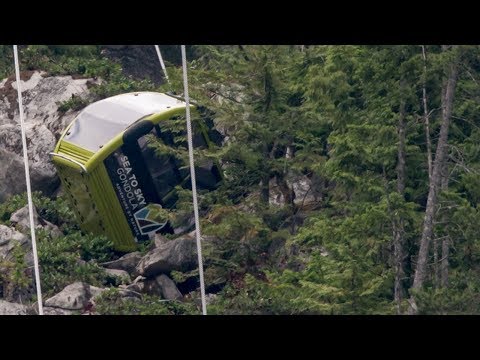 Squamish Sea-to-Sky gondola cables deliberately cut, RCMP say Squamish Sea-to-Sky gondola cables deliberately cut, RCMP sayPolice are continuing their investigation into what caused the Sea to Sky Gondola to collapse. Are they say, the popular tourist attraction appears to have been sabotaged. Lesbian are people, she is tracking the story and has more of the details. So what exactly is the latest into this investigation? The RCMP continue to try and look for suspects. They believe is that, in fact, the cable for these cars for the gondola. Was deliberately cut, that this cable was deliberately severed evangelism and they are looking for individuals who may have, for example, hiked underneath this particular cable or this line in order to cut that particular Cable and cause the 30 cars to come crashing down. This happened at 4 in the morning on pretty morning now, if it has been during their hours of operation, which is later on in the day, around 9 a.m. has been up to 240 people injured spouse, but we do know that this investigation is open. It is the site of a crime right now and they’ve closed off by several parts of this location itself, within DC parks, to carry out this investigation and free at the time and here’s how they described it when it all happened, yeah it was super scared. I thought it was like, like rocks falling and then he’s my husband said it was like it sounded more, like metal, lose weight, coming crashing down and again, just so grateful and thankful that nobody was on board at the time it was below to actually get hurt, But let’s talk about the The Operators of the gondolas: are they making any? You know we were here Witnesses in the RCMP, but what about the gondola operators operator said. The CEO, for example, with the general manager, said that in fact the cable had chest been investigated. Had gone through maintenance checked and was in good condition things at this highly unusual occurrence that they make sure that they undergo all of these safety checks. In addition to that, the broader impact to these rides bringing so much revenue during the course of the summer, especially so right now, and as a result of that, of course, they’re facing losses, millions of dollars worth of damage as well, when they try to do those Repairs so facing a bit of course. Thank you for that. Almost all of the 30 gondola cars attached to the cable crashed to the ground at around 4 a.m. on Saturday, according to staff working overnight.