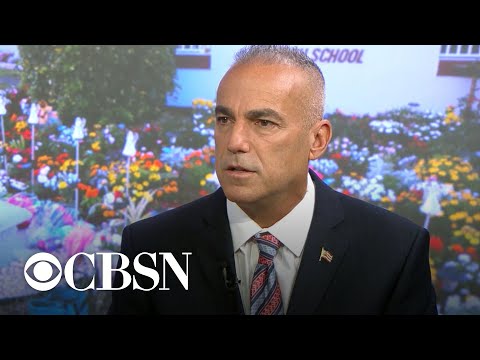 “Stand with Parkland” founder responds to Andrew Pollack’s criticisms “Stand with Parkland” founder responds to Andrew Pollack’s criticisms2028 presidential candidates continue to shine a light on the Nationwide fight over gun control. One father of a Parkland shooting victim is urging lawmakers to take a closer look at school disciplinary policy, Andrew Pollack and joined CBS on Friday and discussed why he believes the student fight for background checks is not enough. What do you think about what the Parkland kids have been doing? You know their they’ve springboard of the whole kind of movement, they’re, very outspoken. What’S your take on the event, I could tell you it’s fact they didn’t accomplish one thing of the State of Florida. We got a bill passed, they weren’t there. We went and tried to change the school board, none of them were there and they don’t look at it like what I just said. If, if these laws are enforced back, what good is a background check? If none of these lost, don’t, if you don’t commit mentally ill people that are violent and put it on there background background checks, don’t work. If you don’t arrest, kids, they deserve it. If you don’t arrest these kids for making threats, background checks, don’t work. So it’s really a mute. What they’re talkin about background checks? It doesn’t make any sense to me: it’s not going to work there really just puppets for the Democratic Party turn off the debts of the 17 people Super. Why on this bus bring in Tony montalto, he lost his daughter Gina in the Parkland shooting Tony is also the president of stand with Parkland Tony. Thank you so much for joining us to ask you what your react as to Andrew bullets comments there. He seems pretty critical of the Parkland students who are organizing for various gun control issues, including further background checks. What did you make of his comments? Well I’ll, say, first off that all our families are grieving terribly and one thing about Andy, it is he’s, got a dedication to change things for the better and that’s why I stand with Parkland. The National Association of families for safe schools was founded and we were founded to look at school safety in a unique and inclusive way, concentrating on keeping our campus safe, constant being on better mental health and Screen programs, as well as responsible Firearms ownership. We feel that all three of these things push and pull on one another in order to make our school safer. Where is the students I’ll say that they did a phenomenal job of keeping this tragedy in the news that they worked hard at to make change? And everybody can play a part if we all come together and start concentrating on what we agree on rather than what we don’t agree on. We could actually maybe get something done in the right now. The Congress talking about some of this. Do you think that more needs to happen to put Bill’s on the president’s desk for his signature? Now we are hopeful that the president will take the lead, tell Congress what he’ll sign into law and get that done. But more importantly, we need to remember that school violence in these shootings are an American Tragedy. They’Re not a day got a problem. It’S not a republican problem. It’S an American problem and the only way to solve this is for us all to come together and start. Looking at what we agree on, instead of looking at the things that keep us apart, four puppet of the democratic party, would you agree with that? Keeping the Parkland tragedy in the news and that Loudon National conversation to continue with any party need to do more to Monitor and to be sure of the status and the intentions of the students. Do you agree with that point or needs to be done? There was a multitude of failures that led up to the tragedy that took the lives of my daughter and the other 16 people. They were wonderful Souls who were let down by a system a complete system and that’s what makes it complicated. Is that not everybody agrees on which elements of that system are the most important to the tackle for the Parkland students they’ve been pushing for back? What is your take on that well stand with. Parkland has an all-encompassing approach. That’S why again, we look at securing the campus, the need for better mental health programs in screen, as well as responsible Firearms ownership. They all push and pull in one another to help prevent these tragedies and each one of those items that I just spoke of failed to protect our children and spouses that day, and so of course, he’s of it. The elements of your organization is fighting for what is next, what is the? What is the end goal for you, Tony parkliner, so successful at stopping these tragedies we put ourselves out of business, but that’s a long way off. What we need now is for everyone to come together to concentrate on the Practical and pragmatic steps that we agree on right now. Come together, get those into law. Let’S capture the agreement, we have and then build a bridge to where we want to go. If we don’t all come together and start trying to solve, these problems will never have change and we need both parties in the president to come together to help us fix this problem. Thank you very much have a good night. The president of “Stand with Parkland,” Tony Montalto, is responding to Parkland father Andrew Pollack, who claimed that students have not accomplished a thing in the fight to stop mass shootings since the 2018 tragedy. Montalto joined CBSN to discuss what his organization is fighting for.