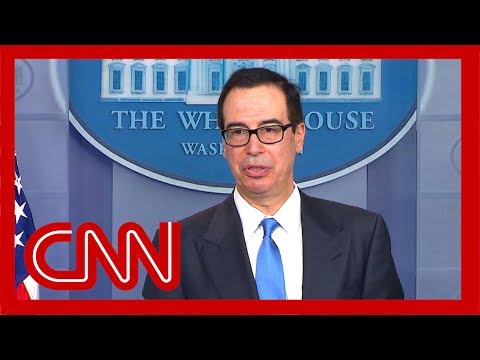 Steve Mnuchin details new sanctions on Iran Steve Mnuchin details new sanctions on IranSo I think it’s you know. I just left the Oval Office were President Trump signed a new executive order authorizing even more expanded sanctions against Iran. So now, what with along with Ara sanctions Authority, we have additional sanctions to go after the Supreme Leader’s office and lock up literally billions of dollars more of assets. We are also and saying specific actions targeting those responsible for recent activities sanction soleimani for his behavior today. I am going to announce three of his other senior leaders, tank Siri, who is responsible for the Iranians regimes, forces threatening to close the Strait of Hormuz, who is the commander of the Air Force and responsible for Downing the US unmanned aircraft and international airspace. As long as pakpour, who is responsible for irgc ground, along with those, we are also designating 5 Naval District leaders call on Shahi Shahi monster of on car in these sanctions are all very important for recent activities. The president has also designated instructed me that we will be designating zarif later this week. So with that and happy to take a few questions, it was in the works. Previously actions are people who have either made threats or specific things and again I don’t think you should interpret this anywhere otherwise other than we are designating people who we believe we’re responsible for the chain of command, whether they knew it or not. What is your response to your critics, who say these sanctions are more to follow construction tip and they won’t win. I think the president was very clear if they want to come back to the negotiating table, if he’s ready, if not, they won’t for the people who say these are just symbolic. That’S not the case at all., We’ve literally locked up tens and tens of billions of dollars. These sanctions, along with additional entities were people are hiding money. So now these sanctions are highly affected. What side do they do? There’S no question effective and cutting off funds going to the irgc and other people, and I can, I can only presume, not going to presume why they’re doing things, but these are highly highly effective. I’M locking up the Iranian a condiment is the president said we look forward to a time and releasing sanctions if they’re willing to negotiate that is as high as you can go inside of a Ron. Can you give us the thinking as to why the administration wanted to bring it up, but that level and clear maximum pressure on the sanctions, so that is that is our strategy? Rogers Tim, it’s it’s! The leaders office, which encompasses a whole range of activities. Please people have money or assets outside, so the answer is: whenever we do sanctions, we do do intelligence. I can’t comment on any of the specific Intelligence been again. I would say we follow the money and it’s highly effective. Thank you is a military option or still on the table. They also be imposing sanctions similar to it not have not consulted on these specific sanctions. The answer is, in general, I’ve had many many conversations with all our allies. I was in Japan 10 days ago. Meeting with Finance Administration discussed are sanctions program I’ll be going to the G20 with the president, and this will continue to be a topic of discussion and the recent events is that about the shooting down a drone or the attack on the 6th anchors or pulled some Of these are, in addition, all of the above. Some of us was in the works, but this is a result of recent activities. So I look forward to our discussion in Bahrain will be rolling out the economic plan, which will be great opportunities for the people of Palestine. We have a terrific group there or Finance ministers, Business Leaders all around the world. What about 350 people going? So I look forward to it having an effect on Iran’s Behavior comment was not with the people of Iran, so I just want to be very clear. We are not looking at creating issues for the people of Iran. Having said that, we are have sanctions against bad behavior and there’s no question that locking this money up worked last time and there’s no question locking the money upworks now Treasury Secretary Steve Mnuchin outlined the new sanctions against Iran, saying “these sanctions are all very important for recent activities” and will “lock up billions of dollars more in assets” that support the office of the Ayatollah Khomeini.