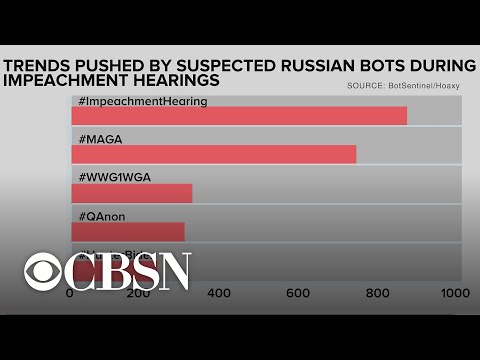 Suspected bots push conspiracy theories during impeachment hearings Suspected bots push conspiracy theories during impeachment hearingsAs a nation prepares for next year’s presidential election, all eyes are on Russia. The country’s meddling in the 2016 election was confirmed by special counsel Robert Mueller. During his testimony to the house earlier this year, he warned lawmakers. Russia would continue to interfere in our democracy in molars words quote they’re doing it last week. He joins me now hide an fascinating stuff. So, for the past, six to eight weeks, you’ve been following these misinformation. Disinformation campaigns that you say really got going during public hearings during the impeachment inquiry campaign has progressed, and then we hit the impeachment hearing. Last week we saw a number of conspiracies and false narratives explode like this conspiracy that Ukraine was behind the hacking of the 2016 election that is boss. He was Russia popping hi. We also song nerd, is related to a conspiracy for qanon or to Anonymous. This is related to the 8chan, subreddit or hn message board. This is important because heresies, we start related to other conspiracies. In fact, we saw them tied to the hunter Biden, false narrative conspiracy. We saw them related to the pizzagate, false narrative conspiracy regarding the 2016 and a lot of the conspiracies regarding a 20 Hillary Clinton running in 2020, again again, spirits and false narrative kapton. So I want to issue one caveat and that’s that I am a reporter. Not a data scientist do I use a number of tools and then I cross check those tools against each other, and then I get on the phone with data scientists who work at these organizations Bealls our own pulling analyst here at CBS News, the number one or The primary source I use is a dashboard from the securing the securing democracy Alliance of the alliance for securing democracy. This is a part of the German which is a nonpartisan Think Tank design to further North American dialogue. So what they do is identify Bots and accounts associated with, and it looks at the keywords that those accounts are pushing. I also use an account recycle but Sentinel, which lets me come across check. The trending topics and I use a final tool developed by University of Indiana. That lets me look at individual accounts. Income gave the veracity how real this site appears. Question Tanya. Many of these social networks have said that they are deleting many of these influence operations, as well as the late last week, getting rid of bots associated with, say Russia, Iran, China, but they haven’t been able to effectively counter or operations that are popping up, because distance Are daylight between running a legitimate operation, using big data to buy advertisements and using some of these Shady or tactics that also involve Bots? One of the best examples we had is the 2018 Alabama special election really expect, because this disinformation is so easy to execute and so ineffective or so effective, inexpensive and effective is we can see domestic operations pop up throughout the 20/20? That’S what we have to look forward to is the 2020 election going to be known as the disinformation campaign run-amok those trending topics inside social networks, including Facebook and Twitter. We can expect to see, especially when we look at a lot of hashtags, pretty scary, stuff down. Patterson, thank you so much for sharing your findings with us. There are widespread concerns about Russian interference as the U.S. prepares for the 2020 presidential election. CNET senior producer Dan Patterson looked at misinformation campaigns pushed by suspected bots during the recent impeachment hearings and how tactics used to interfere in our democracy could threaten the upcoming election.