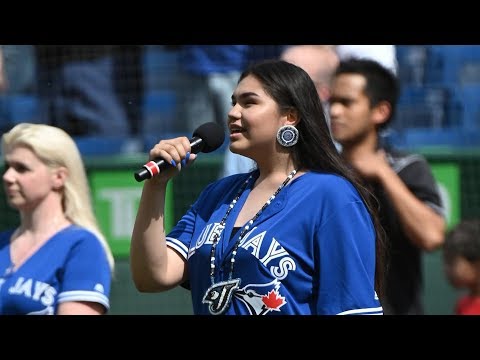 Teen sings O Canada in Cree at Toronto Blue Jays game Teen sings O Canada in Cree at Toronto Blue Jays gameToday’S Blue Jays game in both English and create the thirteen-year-old from Alberta, Samson Cree Nation, was invited to perform her bilingual version of O Canada and celebration of national indigenous people’s day, and we have the start of that performance or right here in studio. Here is Kaia. Bruno thank you for joining us today. First, I want to ask you that was her first time I think watching the video play on TV for you watching your sing on such a Monumental day. It was really cool and it’s really funny.. I got to sing in front of people. I haven’t really done any lost like a whole. Bunch of interviews like this is fun for this event, Cesar, like my first interview but I’ve. So first tell me before you sing the national anthem. How nervous were you? How did you prepare? I wasn’t I was never, but it wasn’t that nervous because previously assigned it different community events in Alberta, Prospect, baseball game in Edmonton and also the Oil Kings game. Those were just a couple of hundred people, the tops, but to sing in front of 20,000. People is really big. So how did you prepare yourself from you know a few hundred to 20000 people just kind of taking it all in, and you recognize the fact that it is a history-making moment in the fact that they have not had the set up Bluetooth game before that they’ve Had someone sing the national anthem, sing, O Canada, Angels, cree and English, so knowing that that made, you feel what goes through your mind when you think about that. It’S a really amazing and wonderful experience to go through that and to be a part of a historical event. And for me to stay in my indigenous language tree and to show in to represent indigenous an indigenous peoples a piece of like my culture and what we speak learner language and Inspire them to maybe represent their arts and learned their language from like elders and stuff. Talking about how this opportunity came about to so tell me a little bit about how it was that you sort of applied for this position and when you found out that you were actually going to be singing, the national anthem can call for indigenous artists to come. Perform for this event for indigenous people’s day, and I actually think that I was going to be actually getting the part and I was really happy excited excited. I was on my way home from school, and I found out that I was going to be performing at the Blue Jays and is this your first time to Toronto for Samsung or at a Blue? Jays game was my first time out of Blue Jays game, but I use come to Toronto a year prior. Just for a game show that I do if my mom called just like Mom and Dad and your mom and Dad are here watching they were there supporting you at the game itself and I imagine the community is so supportive and excited to what have you heard Messages from back home from family from Friends, the really happy for me could showcase every are my language and other indigenous peoples language. I guess to that. I’M going to be singing at the Blue. Jays is audition and stuff and model Haswell Kiya Bruno, 13, from the Samson Cree Nation in Alberta got to sing a bilingual version of O Canada, partly in Cree, at Saturday’s Toronto Blue Jays game.