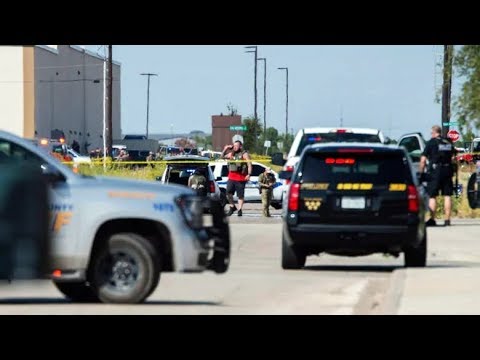 Texas gunman was shooting at random after routine traffic stop, police say Texas gunman was shooting at random after routine traffic stop, police sayThe number of victims in that shooting in West Texas has gone up. Officials now say: 7 people are dead. In addition to more than 20 others wounded by the gunmen police say the violence began when the suspect open fire during a routine traffic. Stop hear. Officers are evacuating a restaurant with diners holder holding their hands high above their heads, an abundance of caution but understandable, given what we know about the violence that unfolded reporter Steve futterman is in Odessa cyst with more on what happened and the victim’s happen around 3. In the afternoon local time here yesterday, what we thought would have been a normal routine traffic. Stop the man, the suspect, the man who opened fire was pulled over by Texas state troopers before they could get to the car. Open fire is shooting one of them, injuring him, and then they Rampage began. He spit off was on Interstate 20 and as he was driving, he was opening fire we’re shooting. We don’t think it was aiming at anyone in particular just shooting indiscriminately, and this went on. Then he got off the highway onto the street street. It was the street was 52nd Street here in Odessa again, shooting people shooting car firing at people in discriminately. He was finally at one point and calm down and he changed vehicles in the middle of all this. He left the vehicle that he was in. He hijacked he took over a postal truck of u.s. postal continue. The Rampage from excuse me he ended up. Finally, here at this movie, theater, which is a multiplex – and this is where police finally tracked him down – that was a scene of chaos inside and outside the theater. Let’S listen to a man was actually inside the theater. His name is Ethan by ASA we have Pops. I don’t know where, with guns and flashlight has to evacuate the building, we keep running and we’re running and running and in route. What does praying. You know as well, and that was the scene, as you saw some of the video he took as people were trying to escape. They had no idea really. What was they were cheering for the their lives by probably so so that’s where it ended. Hear the gunman was shot and killed, and that’s where this part of the story came to an end. We have not been told his name. Police have not released his name. He has a white man in his 30s. At this point, we have been led to believe that there’s no political or racial motivation to this killing in Odessa, Texas, The Texas gunman who killed several people and injured more than 20 yesterday kicked off his rampage after being pulled over in a routine traffic stop, police say. The gunman opened fire on police during the traffic stop, hijacked a U.S. Postal Service vehicle and began firing at random in the area of Odessa and Midland. He was later located by police outside a movie theatre, where he was shot and killed.