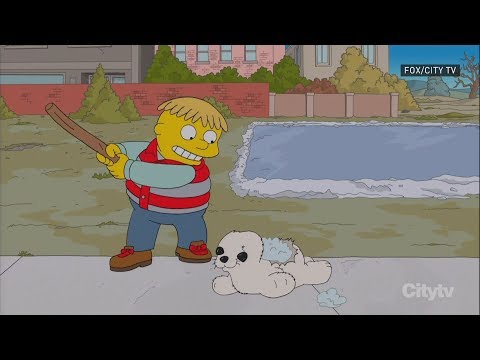 The Simpsons taking fire over ‘stupid Newfie’ scene The Simpsons taking fire over ‘stupid Newfie’ sceneIn Canada, where you’ll be safe and assign your own hockey team last night hope Canada taking a lot of shots of Canadians and stereotypes and personalities, but there’s one has a lot of people talking, but maybe the show went too far here. It is accept these stupid jokes about the seal hunt. You know we had to check in with Peter Calin in St John’s to find out if people were watching and Peter how they are reacting this morning good morning, Heather and if they didn’t watch. It certainly been watching it this morning on the clips that have been circulating online because for many newfoundlanders that term Newfie is really a loaded term has been hurled as an inch towards people, and so when it’s used in the context like The Simpsons you’re bound to Get reaction and some of the people are saying, for example, on Twitter goofy, joke Tim long rope for tonight’s Simpsons episode too much a surprise that in all my 45 years the lamest at least interesting Newfie joke I’ve heard was on The Simpsons Diamond said. I’M a fan of The Simpsons, but the stupid a joke was way out of line. You can still see the world doesn’t have their facts straight about seals. White coat haven’t been killed since 1987, as well as seals are killed with a high-powered rifle and not a club. Now not ever was offended, though the tweet from scumbag. This isn’t the first time that the seal hunt and The Simpsons have kind of been tangled up together. Sam Simon was one of the creators of The Simpsons came to Newfoundland in 2013 and he brought Pamela Anderson with him and a giant check and the offer was $ 1000000 in order for Newfoundland and Labrador to end the seal hunt. Now that didn’t go over well, a lot of newfoundlanders were offended that people simply didn’t understand the importance of the seal hunt to newfoundlanders as well as indigenous people here, and they did not cash. The check and Simon died a number of years ago from cancer, but we know anytime term Newfie. It’S going to be a loaded term to you thanks very much for a tar, Peter Calin in The Newsroom in st.joe A scene in which a Canadian Ralph Wiggum look-alike exclaims, “I’m a Newfie!” and clubs the head off a stuffed baby seal is sparking a debate on social media over whether the joke was in bad taste or just lazy.