Thieves take off with jewelry from historic German museum 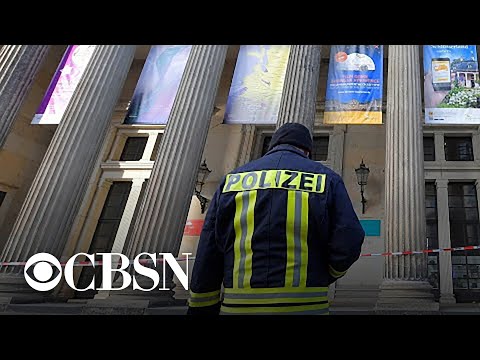 Thieves take off with jewelry from historic German museum Thieves take off with jewelry from historic German museumA gang of Jewel thieves is on the run after pulling off a massive heist in Germany, it happened at Dresden, Royal Palace earlier today. Official save the stolen jewelry could be worth a billion dollars. Tina Krause has more police in Germany. Hope, surveillance video will help them catch the burglars who broke into the green Vault. I Historic Museum in the city of Dresden filled with rare Treasures, window of the well-protected Royal Palace after reportedly cutting the power and deactivating the alarm. The game Saturday display cabinet making off with at least three sets of Priceless 18th century jewelry, including diamonds and rubies. It could be stop to a billion dollars. I Museum director says she shocked by the brutality of the burglary and says: even if the robbers try to break up the jewels, they are so well recognized. They be impossible to sell on the open market. most valuable gym of 41 karat diamond is safe, since it’s on loan to New York’s Metropolitan Museum of Art, detectives are still collecting evidence at the scene and trying to determine what other Treasures may have been stolen. Police are called the early morning break in the largest art heist in post-war history: Tina Krause, CBS News, Authorities are trying to catch the thieves that broke into and took off with jewelry sets from Germany’s Green Vault, which contains one of Europe’s largest treasure collections. CBS News’ Tina Kraus reports.